I am pleased and amazed to report that Arabella of Mars, my first novel, has won the Andre Norton Award for Young Adult Science Fiction and Fantasy, presented by SFWA as part of the annual Nebula Awards. (Complete list of Nebula winners and nominees.) Previous winners of this award include J. K. Rowling, Terry Pratchett, Cat Valente, and Nalo Hopkinson. The award was presented by last year’s winner Fran Wilde.

To say that I’m overwhelmed would be an understatement. I barely emerged from my room yesterday and I’m still stunned. Congratulations have been pouring in via every available channel; I have not been able to reply to most of them but please know that I am very appreciative.

Here’s the text of my acceptance speech:

I’d like to thank everyone who read, nominated, and voted for Arabella for this award, whose name honors one of our finest writers, and acknowledge all the other, very worthy, nominees. Special thanks to Moshe Feder, who acquired it; Christopher Morgan, who edited it; Patrick Nielsen Hayden, who provided invaluable support; Paul Lucas, my agent; copyeditor extraordinaire Deanna Hoak; Mary Robinette Kowal, my invaluable guide to all things Regency and navigating the dangerous shoals of publication; Janna Silverstein, my greatest adviser and cheerleader, and most of all my late wife Kate Yule, who never stopped believing in me. Pittsburgh was her home town and she would have been so proud and happy to share this moment. I wish she could be here. I still love you, snookie.

After I sat down Seanan McGuire let me cry on her shoulder for about five minutes. 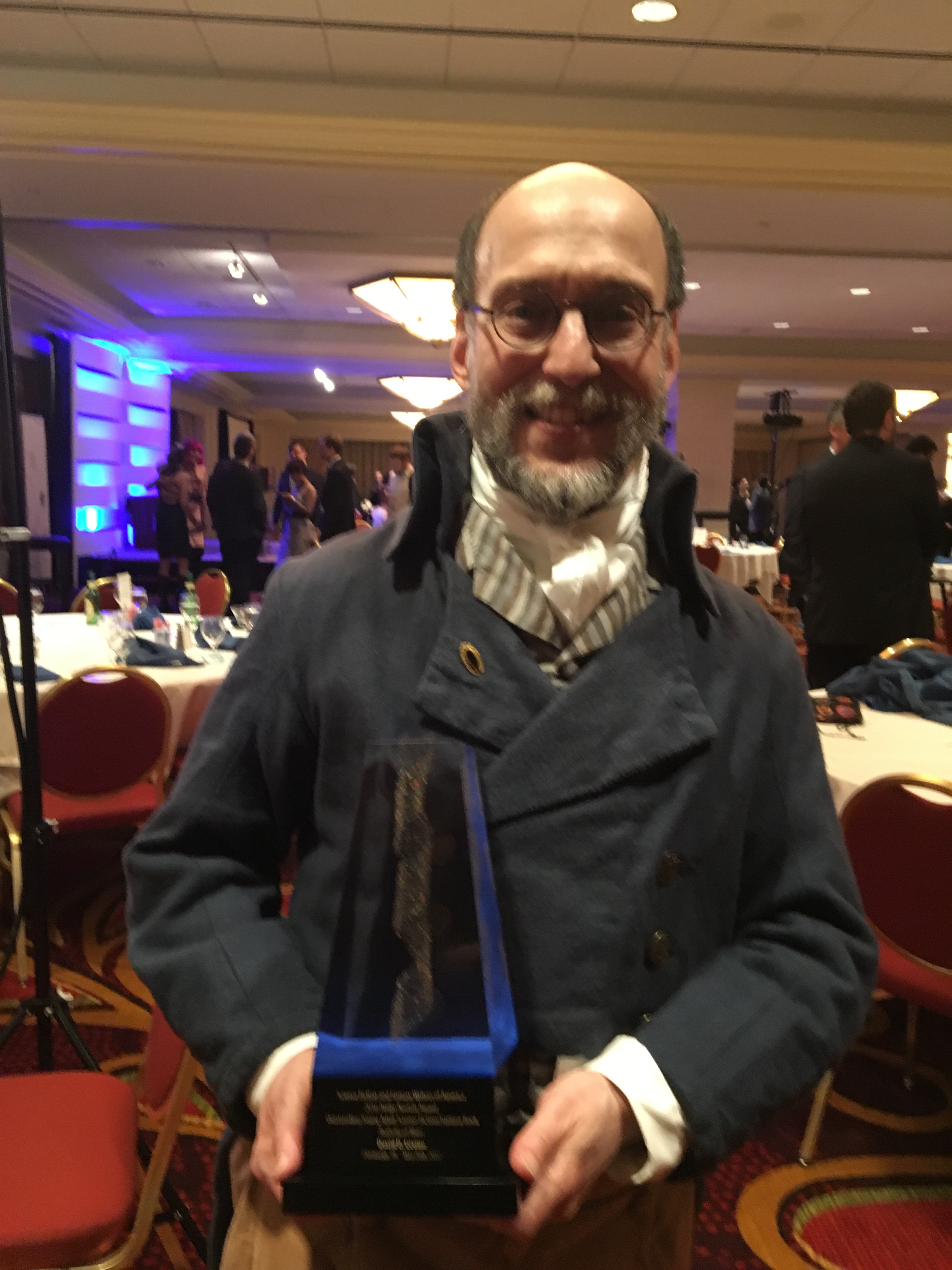 How tall is a horse?

Seriously, think about it. How tall is a horse? The answer — specifically, the units of measure you use — says a lot about you, and about your culture, and my goal here today is to get you thinking about how units of measure can be used as a tool for worldbuilding and character development in fiction.

I bet a lot of you would state your answer in terms of feet and inches. Just from knowing that about you, I can tell that you’re either a present-day American, or a member of certain European and European-derived cultures from the middle ages to the local introduction of the metric system. But during the earlier part of that period you might have thought in feet and barleycorns rather than inches, or in fractional feet — five and a half feet rather than five-foot-six. At other times and places the larger unit would be the yard rather than the foot.

Also, you might have to specify whose feet and inches you are using, as they varied from city to city or which monarch you followed. Napoleon’s height, for example, was five-foot-two in French feet and inches, which is part of the reason the English thought he was short. But that was actually five-foot-seven in English units… taller than the average Frenchman of the time. Whether in dialog or in a character’s internal voice, a character’s consideration and specification of exactly which units to use can do a lot to define a character’s background and priorities as well as the time and place.

If you state your answer in meters and centimeters, I can tell that you’re either a member of certain cultures following the French Revolution, or an American to whom precision and international standards matter more than following the crowd. This offers a clue to your personality, profession, and priorities as well as the time and place in which you exist — it’s a character as well as a worldbuilding item. To completely understand what this choice means you’ll need more contextual information, but even knowing that the choice has been made gives the reader important hints about the character.

Many people will state their answer in hands, or hands and inches, and know that it is measured to the withers, or top of the shoulders. This tells me that you are either an equestrian in a modern English-speaking country, or perhaps a resident of the middle ages or ancient Egypt. Again, knowing the context is necessary to understand exactly what this choice says about you. If your answer is “hands or inches, depending on whether it is a full-sized horse or a pony” that tells me still more about you.

Many other units of measure have been used at different times and places, or may be used in future or fictional cultures. An answer stated in cubits, spans, paces, or fathoms suggests that you are a member of certain earlier human cultures. Answers in dhanu, chi, or cabda specify India, China, and the Arabic world. However, if you use units unfamiliar to the reader, you may have to include other clues; if the character thinks of a person as being six chi tall, the reader will not immediately know whether that’s particularly tall, particularly short, or of average size (and, furthermore, average human height changes over the course of history).

Getting even further afield, answers stated in simile or metaphor tell us still more about the character and their culture. “Tall as a church-steeple” or “thin as a credit card” or “wide as the Grand Canal of Mars” provide immediate insight into who the character is, what’s important to them, and what their economic status is as well as where and when the story takes place.

Entirely made-up units can also be used, and these can tell us even more. “Imperial thornogs” implies an empire, and furthermore an empire in which an earlier, non-Imperial thornog existed. If the thornog is divided into ten squant, that suggests a decimal and hence more scientific culture, but if it’s divided into six or twelve squant that suggests a more agrarian one. If it’s divided into seven or eleven squant, that implies a non-human, or at least decidedly non-Western, culture. But, again, you’ll have to provide additional information to let the reader know whether a horse that’s five thornog and two squant high, measured at the antennae, is a particularly fine specimen or a runt. When carefully handled, describing an object in fictional units can inform the reader about the object, the observer, and the setting in just a few words.

Every time a character sees anything, they will seek to comprehend it in terms that make sense to them. Conveying those terms to the reader helps the reader understand the character and their culture, and can be an important tool for both worldbuilding and character… and even plot. Football, after all, is a game of inches.

Each author will read a selection of their work, followed by Q&A with the audience moderated by author Terry Bisson.  Books for sale courtesy of Borderlands Books – please feel free to bring your own books from home.

The American Bookbinders Museum’s entrance is located at 366 Clementina Alley, off 5th Street, between Howard and Folsom. Street parking is free; garages are located at 5th & Mission, and 3rd & Folsom. The closest BART station is Powell Street – just turn down 5th Street, cross Mission and Howard, and turn left onto Clementina. NOTE: there is NO access to Clementina from 4th Street due to construction.