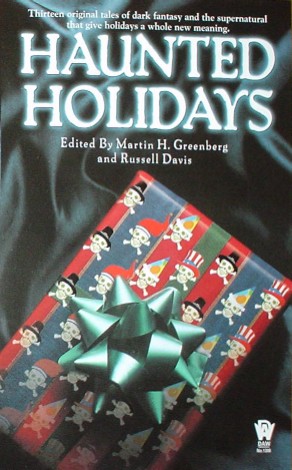 This is the first ghost story I ever wrote on purpose. (I wrote a story called “Pushing Up Daisies” very early in my career, which I still think of as science fiction, but everyone else seems to think it’s a ghost story. Might be because the first-person narrator dies in the first paragraph…) One of the nice things about themed anthologies is that they can make you write stories you didn’t know you had in you.

This story began for me with the climactic image (you’ll know it when you read it). I knew that scene had to take place in a dangerous factory — one where a lot of workers had died over the years — and I knew that if I could figure out exactly what had killed them all I’d know who the other characters were and what the situation was. I started with a web search on terms like “killed in a factory accident” and fairly quickly determined that what I wanted was a steel mill, and it had to be early enough in history that modern safety measures were not yet in place. Combine that with memories from a trip to Pittsburgh a few years ago, and I knew — I just knew somehow — that the story took place in a small Pennsylvania steel town during the Great Depression.

I’ve written stories about supernovas and zero-point energy and cosmic background radiation without doing a lick of research — I remembered most of that stuff from classes I took in college, and was prepared to fake the rest. But for a story that takes place in an Italian family in a small Pennsylvania steel town in 1937, I had books and printouts layered six deep all around my writing chair. The settings are real places in Monessen, Pennsylvania (though the name Kensington Steel is fictional), many of the character names are taken from the Monessen papers, and many of the incidents are based on real historical happenings (notably the Republic Steel “riot” on Memorial Day in 1937).

The hardest part was capturing the dynamics of a Depression-era Italian family (I’m Jewish, middle-class, and an only child). But I knew that brotherhood was the only thing that could bring Gus back from the grave.

At first there was no sign of what had woken him. Sofia snored gently beside him, and little Bella breathed peacefully in her crib beside the bed. Similar sounds came through the door, where Anna and her two children slept in the living room. Six people made a tight crowd in the four-room company house, but Tony could not shirk his family obligations.

Just as Tony was about to settle back down and close his eyes, he saw something move. It might have been the curtains stirring in the fitful breeze, but no — it was at the foot of the bed. Something rippled in the stripes of yellow light cast by the street light through the Venetian blinds.

Tony’s eyes snapped open and his heart pounded. “Anna? Is that you?”

“Don’t you know me, you moron?” The voice was familiar, but it sounded like a long-distance telephone call from the bottom of a freezer, and the hair rose on the back of Tony’s neck.

Tony squinted into the darkness. Was that a human figure perched on the footboard? Or was it just a shadow? Tony could see right through it to the Blessed Virgin on the wall behind it.

“You’re not Gus,” he hissed. He gripped the sheet so tightly he felt it start to tear.

The figure leaned forward, the stripes of light shifting across its face, and Tony thought he saw Gus’s big ears and prominent Adam’s apple. Just like his. “Who else would know about the deal you and I made with Walter Ailes?”

Goosebumps pricked Tony’s forearms. “I never should have let you talk me into it in the first place.”

The shadow seemed to shake its head. “I’m sorry about that, now.”

Tony closed his eyes, pinched the bridge of his nose hard. “This is a dream, right?”

“Maybe. But even if it is, there’s one thing I want you to remember when you wake up.”

Tony let go of his nose, stared at the shadowy figure.

“You’re going to have to decide who your real friends are, little brother. Ailes gives you money, but…”

“I have Anna and your kids to support! There’s no way I can back out now.”

“Don’t make the same mistake I did.” And then, without transition, Gus was gone.

Tony gazed on the face of the Blessed Virgin. Her cheap printed smile was not very comforting. It was just a dream, he told himself. But then he put out a hand to the footboard where his brother’s ghost had sat. The wood was cold under his fingertips, though the July night was sweltering.

Tony put the pillow over his head, just like when he was a kid, and shivered until he fell asleep.