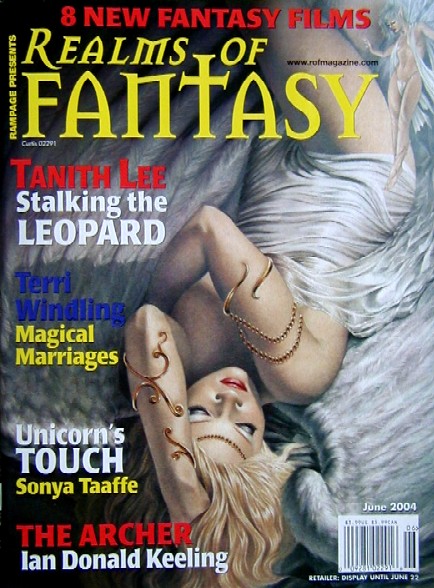 This story came about from reading a particular episode of Gerrit de Jager’s fine comic Roel en zijn beestenboel (I don’t read Dutch very well, but my wife helped). In this strip Bokkie, the lunatic goat who rapidly took over the comic from its nominal main character Roel, turns and addresses the audience about why he has decided it is necessary to hand-carve the toothpicks for the restaurant in which he works. From entire raw trees. One tree per toothpick.I read the strip, I laughed, and then I wondered… what would the other characters think if they overheard Bokkie talking to the readers? They’d think he was mad. Well, he was mad… that’s what made him funny. But in this particular case he was entirely sane.

And wouldn’t knowing that be a bitch?

Thanks to the fine folks of the Strange Horizons Oregon Coast Writers’ Workshop, who gave me many valuable comments on the first draft of this story.

P.S. Although I’m delighted by the illustration in Realms of Fantasy, it’s not quite the way I’d pictured the characters. I thought of Charlie as looking like Bokkie the goat from Roel en zijn beestenboel, Jerry as one of the squirrels from Mutts, and Doctor Nocerous as a Boynton rhino.

“There are plenty of cute touches, but the story turns oddly and effectively darker as none of the other characters believe Charlie. … Recommended.”
— Rich Horton, Locus

“‘The Adventures of Rocky and Bullwinkle’ in the late 50s and early 60s included a cast of characters and a narrator who were very much aware of their presence in a cartoon. David D. Levine creates comic book character Charles the Purple Giraffe in ‘Charles the Purple Giraffe Was Acting Strangely’ and allows him the same type of self-awareness. Unlike Bullwinkle, however, Charles is the only one in his world aware of the reader, with a resulting existential crisis. Although the story would appear to have humor, it really doesn’t beyond the humor of the absurd. Given the plays of Samuel Beckett, perhaps the humor of the absurd is the only kind of humor which can really encapsulate existential quandaries.”
— Steven H. Silver, Tangent Online

Jerry the orange squirrel was walking down the sidewalk one day when he saw some word balloons floating above the hedge beside him. It was the voice of his friend Charlie the purple giraffe. “A man has to have a proper garden, doesn’t he?” Charlie was saying. “And what makes a proper garden? Proper plants! And what do you need for proper plants?”

After each question, Charlie seemed to be waiting for an answer. But no response was visible.

“You need proper dirt!” Charlie continued. “And what do you have to have for proper dirt?”

Intrigued, Jerry scampered to the top of the hedge and stared down. What he saw made the little lines of surprise come out of his head.

“You have to have proper worms!” Bent double, Charlie was busily tying a Windsor knot around the neck of a common garden worm. Beside him, a large tin can — its ragged-edged lid tilted at a rakish angle — squirmed with hundreds of worms in tiny top hats, spats, and bustles.

It wasn’t the worms that surprised Jerry, though — Charlie did that sort of thing all the time. It was the fact that Charlie was speaking into thin air.

“Who ya talkin’ to, Charlie?” said Jerry.

Charlie was so startled that his eyes momentarily jumped out of his head. But he quickly regained his composure. “The worms?”

“You didn’t even know I was here.”

“As a matter of fact, I was just about to invite you in for tea. Care to join me?”

They walked from the yard into Charlie’s cozy one-room bungalow. It was pink today, with cheerful curves to its walls and roof, and was surrounded by smiling purple flowers. The entire interior was wallpapered in blue and yellow stripes, which clashed with the green and black stripes of Charlie’s suit.

Charlie poured tea for the two of them, holding the tiny teapot delicately between white-gloved finger and thumb. A musical note came from the pot as he set it down. He seated himself and raised his cup, pinky raised — though he did not drink, for his arms were too short to reach his head. “What brings you out on this fine morning?” he asked. His words were sprinkled with rainbows and candy canes.

Jerry sipped his tea for a moment. “Charlie… you have to admit you’ve been acting a little strange lately.”

“Strange?” Charlie’s eyes darted to one side, then returned to Jerry.

Jerry set down his cup. “You’ve been talking to yourself…”