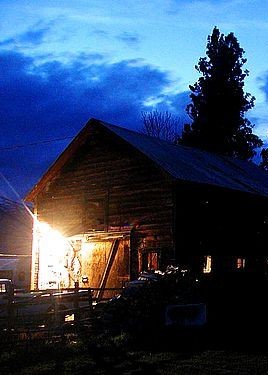 This story was written for Shine, an anthology of optimistic science fiction stories. It didn’t get picked up for Shine, but it did get selected for the associated website DayBreak, which means you can read it for free.

When I got to thinking about how we might not only survive but thrive in the future, naturally I thought about social media. I had been on Twitter for about a year at the time I wrote this and I thought it was pretty darn nifty. This idea of sharing and coordinating with your friends through the exchange of short text-based messages, I thought, could be scaled up to a global network… perhaps even a global conscience. Throw in some ideas about neighborhood-based policing and local optimization of global resources and you’ve got a pretty tidy, yet plausible, utopia.

But stories about utopia are boring. So I decided to write about a guy who’d been involved from the beginning, and who hadn’t quite adjusted to the new world despite being one of the people who’d built it. And, of course, even a utopia has its dissidents. What might happen when these two collide?

we’ve got a problem, read the blip in Ethan Cole’s spex.  something called horrorhouse can you help

The message was from Hannah Davis, a fellow member of Ethan’s neighborhood recycling patrol shift.  Another retiree… or, as they had laughed together, another white fogey with too much time on her hands.

i’ll check, Ethan sent back, and slipped into the blipstream.  Billions of blips every second flowed across his spex, forming a global consciousness, a global conscience.  Summarization and filtering functions built into his blipper made it comprehensible; clever and committed people around the world made it work.

We would have killed for tech like this back in the day, he mused.  But it was the people, of course, not the technology, that made the difference.  Ordinary people reaching out to their neighbors, understanding each other’s goals, coming together to solve problems… that was how you saved the world.

He peered at the local streams and soon found the tag horrorhouse.  Glance, blink, and it expanded, the flowing blipstream dividing into a thousand vibrating threads.  Reach in, tease the threads apart, focus, summarize.  violation of community standards, he read.  offensive disturbing horrific, he read.  too intense for children and immoral and exploitive and sick and profiteering.

Profiteering!  This was serious.

Glance, blink, glance again, ratchet up the level of detail.  The locus was at  68th and Sandy, just a few miles away.  horrorhouse: anyone closer? he blipped to the neighborhood, fingers twitching in a QWERTY dance whose steps hadn’t changed despite the dance floor having been virtualized, hologrammed, and then disposed of completely.

No, no one closer who wasn’t already engaged in some more pressing task.  Very well.  okay i’ll come over, he blipped to Hannah…