I Hold My Father’s Paws 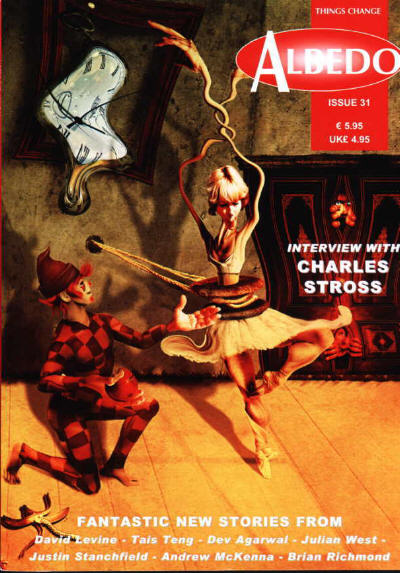 This story has a kind of funny history. I wrote it in two days in May 2002, less than a year after Clarion. I got Kris Rusch and Dean Smith to critique the first draft and they said “Mail it. It’s an award nominee in the hands of the right editor (Gardner or Ellen).” It then proceeded to get rejected by every major market and most of the minors. In February 2005 I submitted it to the Aeon Award run by Albedo One magazine in Ireland. It did not win the award, but it was a finalist and that got it published in Albedo One (though no money). Then, out of the blue, Gardner Dozois (who had been the very first person to reject it back in 2002) picked it up for his 2006 Year’s Best. And then Ellen Datlow, the second person to reject it, selected it for the Telling Tales charity anthology benefiting Clarion West. I am amused.

Here’s another funny thing: I have never owned a dog. Actually, I don’t like dogs at all. But for this story it was the necessary symbolic animal.

“A surprisingly poignant story about the reconciliation between a father and son.”
— Nader Elhefnawy, The Fix

Jason’s father was lying on his side, facing away from the door, as Jason entered. The smell of disinfectant was stronger here, and a battery of instruments bleeped quietly.

He was bald, with just a fringe of gray hair around the back of his head. The scalp was smooth and pink and shiny, and very round matching Jason’s own round head, too big for the standard hardhats at his work site. “Big Jase” was what it said on his own personal helmet, black marker on safety yellow plastic.

But though his father’s head was large and round, the shoulders that moved with his breathing were too narrow, and his chest dropped rapidly away to hips that were narrower still. The legs were invisible, drawn up in front of his body. Jason swallowed as he moved around to the other side of the bed.

His father’s round face was tan, looking more “rugged” than “wrinkled.” Deep lines ran from his nose to the corners of his mouth, and the eyebrows above his closed eyes were gray and very bushy. It was both an older and a younger face than what he had imagined, trying to add twenty years to a memory twenty years old.

Jason’s gaze traveled down, past his father’s freshly shaved chin, to the thick ruff of gray white fur on his neck. Then further, to the gray furred legs that lay on the bed in front of him and the paws that crossed, relaxed, at the ankles, with neatly trimmed nails and clean, unscuffed pads.

His father’s body resembled a wolf’s, or a mastiff’s, broad and strong and laced with muscle and sinew. But it was wrong, somehow. His chest, narrow though it was, was still wider than any normal dog’s, and the fur looked fake too clean, too fine, too regular. Jason knew from his reading on the plane that it was engineered from his father’s own body hair, and was only an approximation of a dog’s natural coat with its layers of different types of hair.

He was a magnificent animal. He was a pathetic freak. He was a marvel of biotechnology. He was an arrogant icon of self indulgence.

He was Jason’s father.