Love in the Balance 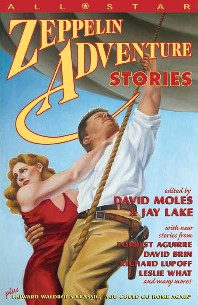 This story started as just a vignette: 400 or so words written for an Exquisite Corpse (a writing game in which each writer adds a short section to an ongoing story) started by Jay Lake. I whomped it off in an hour. But I was so intrigued by the setting — a kind of China Mieville magic/technology hybrid universe — that when I heard about the All-Star zeppelin anthology I decided to expand the vignette into a story. It already had zeppelins in it, and zombie goats to boot. I changed the zombie goats to human zombies, because I thought the goats were both implausible and just too much of an in-joke, but apart from that it was a straightforward extrapolation from that bizarre little vignette.

I wrote the story at the Oregon Writers Colony’s Colonyhouse. Starting from the original vignette, I just wrote and wrote, introducing characters and relationships as needed. I was never sure as I wrote each paragraph just what was going to happen next. And then I wrote a sentence, and I stopped and thought “gee, what happens now?” — and I realized I had just ended the story. Boom, a whole 4500-word story in one day.

At first, I thought the ending was terribly ambiguous. But I got a couple of the people who were there at the Colonyhouse to read the story, and they said the ending wasn’t ambiguous and it was satisfying. And, indeed, when I read it again I found it was not ambiguous — there’s really only one more thing that could happen after that point, so there’s no need to show it. I did go back and tweak one scene in the middle to make the ending work better — but I only added two letters, changing “I love you” to “I loved you” in two places. Later, at the editor’s request, I changed the last sentence a bit. But fundamentally it’s still the same as it was when I finished it that day.

The really weird thing is that, even though I wrote it straight through in one sitting without knowing what was going to happen next, it hangs together surprisingly well. For example, in the first scene there is a little side bit about a flying vacuum cleaner. It doesn’t have any relevance to the plot, I wasn’t thinking ahead when I wrote it, it’s just there for atmosphere. But, upon reflection, it demonstrates in microcosm a lot of things about the universe of the story: this is a world in which there are engineered creatures that perform services for humans, but have their own lives and their own agendas, and they fly.

“The formality of this setting, interhouse warfare with the feel of Dune, and love between a man and an intelligent airship forced to fight make this a truly great SF tale.”
— Jason Fischer, Tangent Online

“A few stories here feature zeppelins as living beasts — an idea I find irresistible. … In David D. Levine’s ‘Love in the Balance’, intelligent zeppelins are ships in a war between floating ‘houses,’ involving zombies, a hint of baroque politics, and ex-lovers on opposite sides.”
— Rich Horton, Locus

“[T]he anthology is a lot of fun in a sly, sardonic way; the best stories here are by David D. Levine and Benjamin Rosenbaum…”
— Gardner Dozois, Locus

Theophile Nundaemon closed the book, shaking his head over the images he’d found therein. So sad, so mad… he closed his eyes and set the book aside, a few maroon particles of the decaying cover dusting the ormolu surface of the table.

Unobserved, a cleaner descended silently and snuffled the debris away. It sniffed at the book as well, but Theo’s scent on the cover indicated this was no discard. The little creature puffed itself up to grapefruit size and drifted off to its nest in the corner of the room. Immature cleaners peeped supersonically and opened wide their jaws.

Theo opened his eyes and stared out the window. Beyond the glass loomed the fog of endless night, and bulbous shapes drifting. Here and there a spotlight picked out the sigil of one or another House on a pennant or tail fin. The red bat of the Unknown Regalia… the silver spoon-and-circle of Theo’s own Guided Musings… and there, the gilded fish of the Pulp Revenants. Angrily Theo twisted the brass and crystal handle beneath the worn sill, and wooden slats snapped shut over the view.

How dare Kyrie summon the zombies again — on this day of all days, and upon the Musings of all Houses? How dare she?

Theo picked up the book and shoved it back on the shelf. That compendium of ancient lore and legends was nearly as useless as the endless mutterings of the House Fathers. He paced before the shuttered window, heedless of the books’ shuffling and muttering as they rearranged themselves alphabetically, and lit his pipe. Then a low familiar foghorn sounded outside the window, and Theo sighed and opened the shutters.

Looming from the dark and fog came the nose of the Grand Edison III — the personal airship of Kyrie Strommond, the flagship of the Revenants, and the long-estranged lover of Theophile Nundaemon.

Theo still felt fondly toward the Edison, and he knew that, despite everything, she still held some warmth in her engines for him. But those cooling ashes of love would be no protection at all from the zombie warriors the Edison now bore within her gravid silver hull. For fluttering from the foremast was Kyrie’s own sigil — Capricorn on a field of stars.

A tear gathered in the corner of Theo’s eye. “Zenobia,” he called to his personal servant. “Prepare my zeppelin gun.”