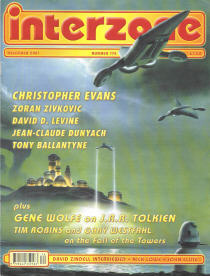 I never thought I would be using the phrase “my most anthologized story” in the first year of my career, but here it is.The genesis of this story came at “Yesterday’s Tomorrows: Past Visions of the American Future,” a traveling exhibition put on by the Smithsonian Institution. The exhibition and I met in Eugene, Oregon in 1984, where I’d gone on a field trip with the Portland science fiction club. One of the objects on display was a model of the Ford Nucleon, a 1958 design for a nuclear-powered car (see the photo below, from the exhibition catalog) which was, fortunately for us all, never produced.

I’ve always felt a great nostalgia for futures that didn’t pan out. I collect old World’s Fair program books, and I carry my lunch to work every day in a Tom Corbett Space Cadet lunchbox. The preposterous, overweening, yet somehow inevitable idea of a nuclear car just lodged in my brain and wouldn’t let go. The hubris! The lack of attention to unintended consequences! The innocence!

I began to wonder what kind of alternate universe might actually have put such a car into production. What other things might have happened in that universe? How might that universe, and others like it, intersect with this one? And what kind of person might find himself at that intersection point?

I finally sat down and wrote this idea into a story in January of 2000. Despite the science-fictional premise, the story turned out a gentle fantasy, a variation on the well-known “mystery shop” trope. I have often had my hard science fiction ideas turn into fantasy, horror, or ghost stories when they hit the page… I don’t know why.

I workshopped the story at the Potlatch science fiction convention, where everyone (including guest pro Vonda McIntyre) had nice things to say about it, then set it aside while I attended Clarion West that summer. After Clarion I edited it, making the characters’ trust in each other grow more slowly, exploring the emotional impact on the main character, making the fantastic element more mysterious and unexplained, and shortening the anticlimax. I workshopped it again, and everyone raved about it.

Fellow beginning writers please note: this beloved (and eventually award-winning) story was rejected by the first six markets I sent it to. I have other stories that have been rejected more than twenty times. Never give up hope, don’t let the rejections get under your skin, and keep writing and submitting until you sell.

The future belongs to the persistent.

“‘Nucleon’ is a fantasy story in the Unknown Worlds tradition. That fine magazine introduced contemporary urban settings into fantasy fiction. The ‘mystery shop’ tradition includes such classic stories as ‘What You Need’ by Henry Kuttner. ‘Nucleon’ is a worthy addition to this tradition.”
— David Hartwell, Year’s Best Fantasy #2

“…a captivating magic-realist rendering of the serendipity of transdimensional junkyards.”
— Nick Gevers, Locus

“…a fine, sweet story of an unusual junkyard — a nice variation on the traditional ‘curiosity shop’ tale.”
— Rich Horton, Locus

“The story is short, and simple, and quite elegant… almost Bradburyesque…”
— Mark Watson, Best SF

One day we were sitting in Carl’s kitchen, sharing a beer after a long hot afternoon tramping around the junkyard. “Tell me, Phil,” he said, “how did you get into this crazy advertising business anyway?”

I thought about it for a moment. “I suppose you’d have to blame my dad. He was an automotive designer at Ford. When I was a kid I’d visit him at his office during the summer; he’d always let me play with his colored pencils. I guess that’s where I caught the art bug.”

“Ford, eh? Did your dad design anything I might have seen?”

“He was on the team that did the ’66 Fairlane. But mostly he did conceptual designs. It was exciting for him to be out beyond the cutting edge like that, but he was always disappointed that none of his designs made it into actual production.” I took a swig of my beer. “He worked on the Nucleon.”

Carl put down his beer. “Nucleon?”

“It was a concept car for a World’s Fair or something like that. A nuclear-powered car, can you believe it? Atoms for peace.”

Carl got a strange look on his face then. “I have something out back that I think you ought to see.”

The sun was low in the sky, casting neon-orange glints off the hoods of a row of old cars all the way at the back of the yard, where we’d seldom gone before. Bees buzzed in the shrubs that grew along the fence. Near one end of the row was a bulky shape shrouded in a moss-covered olive-drab tarp. “Help me haul this off, would you?”

We pulled off the tarp and revealed one of the strangest-looking cars you’ve ever seen. It looked like a cross between an old Caddy with big pointed fins and a pickup truck, and where the trunk, or pickup bed, should have been there was a big square hole that went all the way down to the ground. It looked like a car with a built-in swimming pool.

It was painted in that Godawful turquoise color that was so popular in the Fifties.

On the tailgate was a name in chrome script: Nucleon.

“Sonofabitch! You’ve got the mockup! I didn’t even know they built one!”

I looked. It was no fiberglass mockup. It was real steel, and a little rusty. The doors were scarred with parking-lot dings. The tires were bald. The seats and the steering wheel were worn from use. The odometer showed seventy-one thousand and some miles.

There was no gas gauge.

Suddenly I got a queasy feeling in the pit of my stomach. “Carl… do you, by any chance, have… a Geiger counter?”