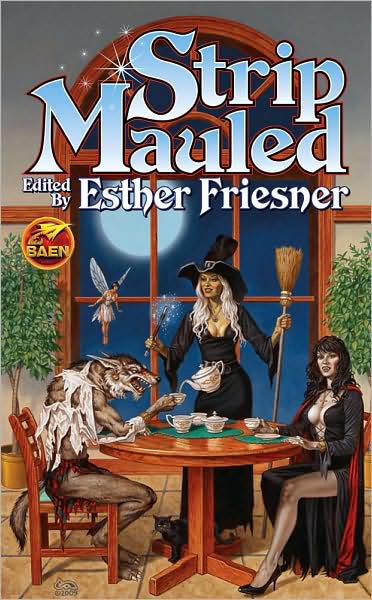 This is the second story of Julian, a teenaged witch in suburban Wisconsin in the 1970s, following “Midnight at the Center Court” from Witch Way to the Mall. This is the first time I ever wrote a sequel to anything.

I don’t know why I don’t usually think in sequels. I know that readers love a continuing series of stories about the same characters, and publishers love them too. But most of the time when I write a story it is absolutely the most important thing that ever happens to that character in their entire life, and anything that might happen before or since would either be a letdown or unrealistic. Maybe it’s because “Midnight at the Center Court” was so much a story about me, in my own life, that I wanted to continue it.

This story is based on a day camp I attended when I was 14. Everything about it is true except for the witches and werewolves. No, really.

While the counselors got the fire going, the kids ran around in the woods behind the campout area, looking for long straight sticks.  Julian found a great one right by the fence that marked the boundary of the camp.

As he bent down to pick it up, suddenly a huge dog started barking like mad on the other side of the fence.  Heart hammering, Julian jumped back, clutching the little stick to his chest as though it would help.  He couldn’t see the baying hound, but the rattle of the fence as its body struck again and again told him it was a big one.  “Nice doggy,” he said as he backed away.

The fire was going strong when he got back to the campout area.  Julian stood in line, got a hot dog, and threaded it onto the end of his stick.  Then he joined the mob jockeying for position around the fire.  The orange and yellow flames licked delicately at Julian’s hot dog, mirroring the banded colors of the sky above.

Despite the importance of the sun and moon cycles to his Craft work, Julian rarely got to enjoy the sunset.  Munching his hot dog, he watched the sun shimmer, seeming to melt as it slid down the sky toward the horizon.  Behind him, he knew, the full moon would be rising, lost among the trees.

Then he heard a retching sound.

Julian turned and saw Harrison running, doubled over, away from the fire.  The other Cardinals started to follow, but she shouted something and they all turned back, chatting among themselves as though nothing had happened.  Harrison continued on, vanishing into the woods.

Julian hurried up the sand to the fire pit.  As soon as he reached the point where Harrison had shouted, his suspicion was confirmed: she’d used Peitho’s Command to turn the others back.  That spell was such a strong one that even Julian couldn’t fail to recognize it.

Harrison the narc, using such a powerful spell on lay people?  If her mother found out, she’d kill her.

Then, in the distance, a dog barked.

It was the same deep-throated woof he’d heard earlier, only even angrier.

Harrison’s father was a werewolf.

Julian set off at a run toward the sound, sand and then dirt thudding beneath his feet…