The Ecology of Faerie 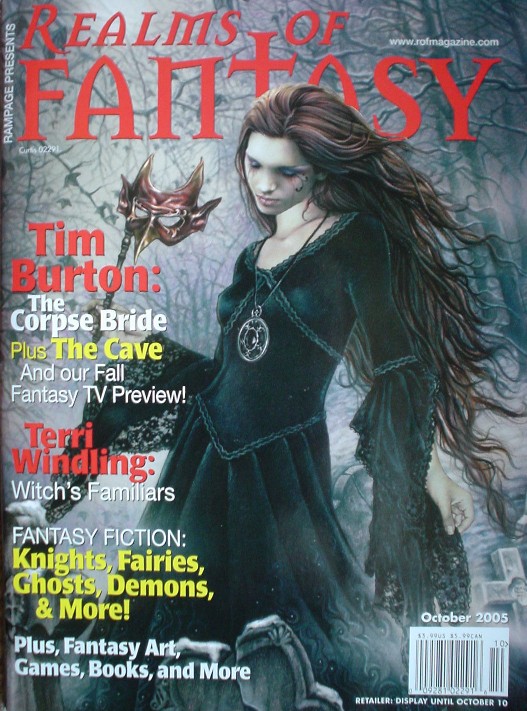 This story started with an offhand comment in a story written by one of my fellow students at Clarion West. One of the characters in that story snacked on pixie wings and commented that pixies are the bottom of the faerie food chain. But that made me wonder: what is the rest of the faerie food chain? The resulting story took off on a tangent from there, but the basic idea is still present.

In this story I wanted to really make visceral the terror and malevolence of faeries. Fairies are not nice people. But, in keeping with the ecological theme, I wanted to make them terrible in a way that was physically plausible — palpable, even. I wound up making them insectile: as frightening as wasps (I hate wasps), but even more terrifying because they wear clothing, use weapons, and are capable of unnatural feats. These fairies are also evil because they are foreign invaders to the local ecosystem, like gypsy moths or killer bees. In appearance, they are the evil twins of the Preservers from Elfquest.

This story also contains another, real-life evil: leukemia. My college girlfriend Ellen Dyke died of it, and a lot of that experience is in this story. In fact, you might say that this story is really about leukemia and the fairies are there only to lend contrast.

I’m very pleased at the way this story came out, and I’m absolutely thrilled with the illustration by artist Andrea Wicklund.

After work that night, Dora went back to the ditch. She brought her flashlight, but she didn’t turn it on — instead she waited at the edge of the parking lot until her eyes adjusted to the dark. Whatever was happening to her frogs, and whatever was the source of that strange greenish glow, it was a thing of the darkness, and if she blundered around with a flashlight she’d never see it.

Moving slowly, as silently as she could, she crept through the rustling reeds and squatted down at the water’s edge. The frogs shut up as soon as she came near, but after a long time they started in peeping again.

A three-quarter moon illuminated the scene with a cold fluorescent light. Dora’s knees started to hurt and the wet ground chilled her feet and her butt. But she remained still. Waiting. Watching.

A plip sound in the water to he left gave her a start, but it was just a frog jumping. She settled down and waited for her heart to stop pounding.

Then the frogs shut up again, though she hadn’t moved, and she thought she saw something off to her right. Slowly she turned her head. There was a pale, flickering, greenish glow, right at the water’s edge maybe three feet away. And at the center of it was something that made her heart contract into a hard cold lump.

It was a tiny human figure, maybe five inches high. Its arms and legs were long and thin, and it had translucent wings like a dragonfly’s. It crouched at the edge of the water, slowly raising one arm — getting ready to pounce on a frog, which floated stupidly just a few inches away from it.

Dora flicked on her flashlight to get a better look at the thing.

She wished she hadn’t.

Whatever it was, though it was shaped like a human being it had nothing else in common with Dora. Instead of skin or fur it was covered with something hard, glistening, and iridescent — black with purple-green highlights. Its limbs were skeletally thin, with harsh mechanical joints like an insect’s; its hands were as disturbingly inhuman as a mouse’s clawed feet. The raised hand held a three-inch spear, thin as a needle, with a wicked-looking barb on the end. On its head it wore a leaf, twisted into a cone.

But what really made the breath catch in Dora’s throat was its face — huge black eyes and a wide mouth bristling with curved, ragged teeth like fingernail trimmings.

The creature opened its mouth and screeched — a thin sound like two pieces of broken glass scraping together — then it flew into the air. The water riffled in the wind from its wings, which made a rattling hum like a big beetle. Dora kept the flashlight beam on it. It screeched again and flung the spear at her with vicious force.

Dora raised her left hand to ward off the tiny spear. It plunged into her palm with a terrible sharp sting, and stuck out the other side. Dora cried out in pain, but she didn’t take the light off the thing.

And there in the light of the moon and the flashlight, in plain sight, it vanished like a candle flame guttering out. One moment it was there, then it flickered and faded and then it wasn’t.

Dora darted the flashlight around, trying to tell herself that it had just moved out of the beam. But it wasn’t anywhere. It had disappeared. She had seen it go.

She realized she was holding her breath. She let it out with a shuddering rush.

Dora’s mouth was dry and she fought to control her breathing. In the warmth and light of her own bathroom it was possible to imagine that she had not just seen a tiny human figure fly and vanish. This spear thrust through her bleeding hand was just a thorn, she had stuck herself by accident, and she would break off the barb and pull it out and put a Band-Aid on it and then it would all be better.

But when she snapped the spear in half it melted away like a tiny flake of ice. She whimpered as she felt it evaporate from her injured hand.

Trembling, she washed her hands thoroughly with soap and water, put antibiotic ointment on the wound — it smelled like the hospital — and stuck a Band-Aid on each side of her hand.

Then she turned on every light in the house, and the TV, and the radio. And she closed all the curtains and huddled, shivering, in her bed.