The Tale of the Golden Eagle 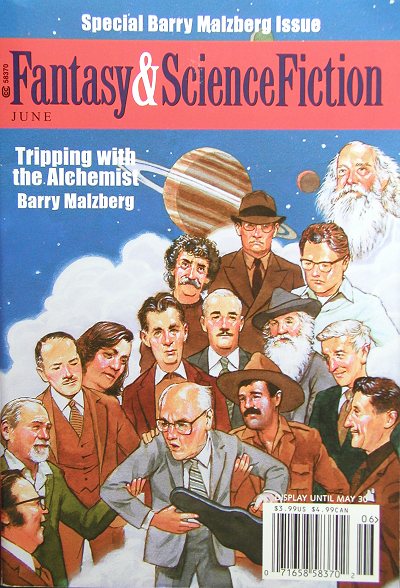 I’ve never been one of those writers who has trouble coming up with plots. My problem is quite the opposite — plots come so easily, so naturally, to me that they tend to dominate the story and force the characters to do what the plot wants rather than the other way around.

At Clarion, one of the other writers once asked me how I came up with plots. We happened to be outside at the moment, and there was a bird flying by, and I said something like “Well, take that bird, for instance. If I wanted to write a science fiction story about that bird… what if spaceships were birds? Genetically engineered birds? Or mechanical spaceships, flown by bird brains?” I had recently read an article about people rescuing former racing greyhounds, who would normally be put down, and adopting them as pets, so this led to the question: what happens when a bird spaceship is retired?

I hope that conversation was as useful to her as it was to me, because I went back to my room and wrote down a one-page outline for the story that afternoon.

I didn’t complete the story until about eight months later, but when I did it came out pretty much the way I had initially visualized it. The idea of spaceships with animal brains reminded me of (or was perhaps stolen from) the wonderful Instrumentality stories of Cordwainer Smith, so I wrote the story in a “Smithian” style, with a great depth of time, loving description, and a recognition within the story that it is a story. There are several deliberate nods to Smith buried in the story as an exercise to the reader.

By the way, when I wrote this story I had no idea Barry Malzberg called himself the Golden Eagle.

“Best of all is promising new writer David D. Levine’s ‘The Tale of the Golden Eagle,’ about a brain encased in a spaceship that becomes a derelict, and the man who discovers and frees this brain far in the future. … Recommended.”
— Rich Horton, Locus

“If the year in books was good, the year in short fiction was astounding…. My favorite short story of the year was David D. Levine’s graceful homage to Cordwainer Smith, ‘The Tale of the Golden Eagle’….”
— Jonathan Strahan, Locus

“…science fiction with the touch and feel of fantasy, and also a delightful story.”
— Nancy Jane Moore, Tangent Online

“…’The Tale of the Golden Eagle’ has that lyrical feel, of a story told many times over the millenia…. A strong story, which suggests a bright future for Levine.”
— Mark Watson, Best SF

“Out of all the stories [in this issue], ‘The Tale of the Golden Eagle’ is the only one I’d consider a must read.”
— Steve Lazarowitz, SF Site

“These days, myth-making tends to be left to the hands of the fantasy writers, while the tropes of science fiction are used to other ends…. But Levine, like Cordwainer Smith before him, weaves old ideas… into [a] new myth, a myth of the future, a haunting story of man, machine, and sacrifice.”
— bluejack

This story begins in a time before shiftspace, before Conner and Hua, even before the caster people. The beginning of the story lies in the time of the bird ships.

Before the bird ships, just to go from one star to another, people either had to give up their whole lives and hope their children’s children would remember why they had come, or freeze themselves and hope they could be thawed at the other end. Then the man called Doctor Jay made a great and horrible discovery: he learned that a living mind could change the shape of space. He found a way to weld a human brain to the keel of a starship, in such a way that the ship could travel from star to star in months instead of years.

After the execution of Doctor Jay, people learned that the part of the brain called the visual cortex was the key to changing the shape of space. And so they found a creature whose brain was almost all visual cortex, the Aquila chrysaetos, or as it was known in those days the golden eagle. This was a bird that has been lost to us; it had wings broader than a tall man is tall, golden brown feathers long and light as a lover’s touch, and eyes black and sharp as a clear winter night. But to the people of this time it was just another animal, and they did not appreciate it while they had it.

They took the egg of a golden eagle, and they hatched it in a warm box, and they let it fly and learn and grow, and then they killed it. And they took its brain and they placed it at the top of a cunning construction of plastic and silicon which gave it the intelligence of a human, and this they welded to the keel of the starship.

It may seem to you that it is as cruel to give a bird the intelligence of a human, only to enslave its brain, as it is to take the brain of a human and enslave that. And so it is. But the people of this time drew a rigid distinction between born-people and made-people, and to them this seemed only just and right.

Now it happens that one golden eagle brain, which was called Nerissa Zeebnen-Fearsig, was installed into a ship of surpassing beauty. It was a great broad shining arrowhead of silver metal, this ship, filigreed and inlaid with gold, and filled with clever and intricate mechanisms of subtle pleasure.

The ship traveled many thousands of light-years in the service of many captains. Love affairs and assassinations were planned and executed within its silver hull; it was used for a time as an emperor’s private yacht; it even carried Magister Ai on part of his expedition to the Forgotten Worlds. But Nerissa the shipbrain saw none of these things, for she had been given eyes that saw only outward. She knew her masters only by the sound of their voices and the feel of their hands on her controls.

When the ship was under way, Nerissa felt the joy of flight, a pure unthinking joy she remembered from her time as a creature of muscle and feather. But most of her time was spent contemplating the silent stars or the wall of some dock, awaiting the whim of her owner and master.

Over the years the masters’ voices changed. Cultured tones accustomed to command were replaced by harsher, more unforgiving voices, and the ship’s rich appointments were removed one by one. In time even basic maintenance was postponed or disregarded, and Nerissa found herself more and more often in places of darkness and decay. She despaired, even feared for her life, but shipbrains had no rights. The strongest protest she was allowed was “Sir and Master, that course of action may be inadvisable.”

Finally the last and roughest owner, a man with grating voice and hard unsubtle hands, ran the ship into a docking probe in a foul decrepit port. The tarnished silver hull gave way, the air gushed out, and the man died, leaving a legacy so tattered and filthy that none could bear to touch it. Ownerless, airless, the hulk was towed to a wrecking yard and forgotten. Nerissa wept as the ship’s power failed, her vision fading to monochrome and then to black. Reduced to the barest reserves of energy, she fell into a deep uneasy sleep.

While she slept the universe changed. Conner and Hua discovered shiftspace, and travel between planets became something the merely well-off could afford. The Clash of Cultures burst into full flower almost at once, as ten thousand faiths and religions and philosophies collided and mingled. It was a time of violence and strife, but in time a few ideas emerged as points of agreement, and one of these was that what had been done to the golden eagles was wrong. So the hatcheries were closed, the ships retired, and the shipbrains compassionately killed.

All save one. One that slept forgotten in a wrecking yard orbiting an ugly red star known only by a number…