I left Facebook over two years ago because I didn’t like their corporate practices, their privacy policies, or their user interface. I didn’t like the games, the ads, or the constant invitations to events and pseudo-events I couldn’t or wouldn’t attend. And managing my friends list was a constant chore.

I’ve been off of Facebook ever since, but it’s been getting harder and harder to avoid. A nonprofit I’m involved with used Facebook to coordinate a recent publicity event. You have to be on Facebook to enter some contests. People are always sending me links to pictures, polls, and articles that are locked behind Facebook’s garden wall. The final straw was that I was unable to participate in the auction of Mark Bourne’s toy robots to support Clarion West. Refusing to have a Facebook account these days is like refusing to have a credit card — an understandable choice, but it makes life harder.

So, I’m back. You can find me at http://www.facebook.com/david.d.levine.sf. I still don’t like their corporate practices and find their user interface atrocious, but they’ve made one important change: they’ve added “subscriptions,” which means that I don’t need to be “friends” with a couple thousand strangers in order for them to see what I post. I will only be friending people who are my actual real-world friends; everyone else is welcome to subscribe. This will, I think, greatly reduce the hassle factor that drove me away before.

This is actually Phase Two of my revamped global social media strategy, but the cart rolled past the horse. Look for Phase One in the coming week.

Leverage returns tonight with “The Low Low Price Job.” Kate and I both worked on this one as extras — tune in and you might see us!

Just received my very handsome contributor’s copy of Heiresses of Russ 2012, with my story “Tides of the Heart.” 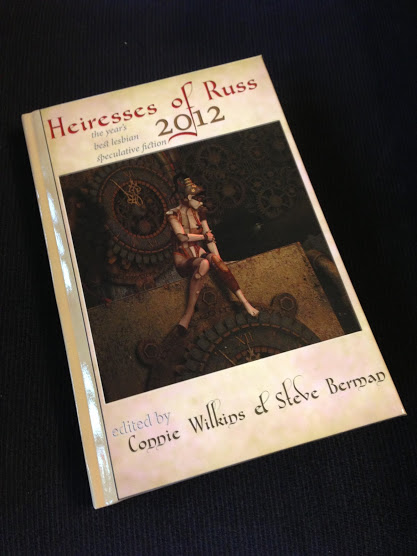 It wouldn’t be Thanksgiving without “Alice’s Restaurant.” Enjoy, safe travels, and best holiday wishes to everyone!

My steampunk power-armor story “The Last Days of the Kelly Gang” from Armored has been turned into an episode of the “Journey Into…” podcast!

Podcaster Marshal Latham heard me read the first part of this story at the SFWA reading a few months ago and immediately requested to podcast it (I think because he wanted to find out how it came out). I recorded the story for him and expected that he would clean it up and ship it out. But what I got was much better than that: a full-cast performance, with a real Australian as Ned Kelly, and sound effects and everything. It’s amazing. My narration is the weakest part of it.

Skyfall is a heck of a movie. Beautiful cinematography, outstanding acting, amazing stunts and special effects. It hews tightly to the conventions of the Bond franchise, yet does it all in a fresh and intriguing way. “Bond, James Bond,” “shaken, not stirred,” the meeting with Q, the fancy car with ejector seat… all are present, as expected, but handled unexpectedly and with a dry understated wit. But though the film is structurally identical to every other Bond film, it’s substantially darker and deeper than any of them.

As usual, the film begins with a spectacular extended pre-credits fight scene, but this one ties in with the rest of the film much more tightly than I can recall seeing before. There are exotic locations and stunts (a brutal fight silhouetted against the digital billboards of Singapore is outstanding) but they are surprisingly gritty and often Blade Runneresque, and the final standoff in the dark and fog is simultaneously reminiscent of every other Bond climax in the secret lair and a complete inversion of that trope. Not high-tech in the least, it’s feisty and handmade. And there are Bond girls, to be sure, with the expected misogyny, but each of them is given a very different send-off than what we’re used to, and Bond’s primary female companion this time is M (Judi Dench, brilliant as always). The longstanding relationship between them and the complete lack of sexual tension give this film an emotional core that I’ve never seen before in a Bond film.

In many ways Skyfall reminds me of one of my favorite films: Star Trek II: The Wrath of Khan. It shares that film’s themes of age, death, loss, and obsolescence, and like that film it ends with a new beginning, a revitalization of the franchise that acknowledges and continues its history yet also reinvents itself with new characters and new energy.

Here’s what I’ve been working on this weekend. Mwah hah hah. 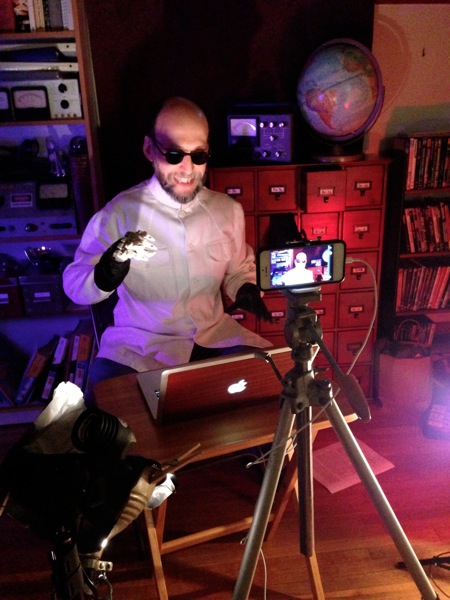 My story “Liasons Galantes: A Scientific Romance” is out today in Beneath Ceaseless Skies #108 (in HTML, PDF, PRC, EPUB, and Kindle formats).

In conjunction with the story, they’re giving away a signed copy of Ann VanderMeer’s new steampunk anthology Steampunk Revolution. Enter to win!

I’m intrigued that they describe this story as steampunk. When I was writing it I thought of it primarily as a romantic fantasy, set in a fantasy world reminiscent of Belle Epoque Paris in which relationships are visible as living things. The electrical gizmos in the story, I thought, were just props. But of course all of these elements do add up to something steampunkish, especially given that I subtitled it “a scientific romance.”

This isn’t the first time I had no idea what kind of story I had written until it was published. I thought my story “Nucleon” was hard SF, an alternate-universe story about an atomic car. I even sent it to Analog. But it turns out it’s actually a fantasy, a variation on the well-known “mystery shop” trope, as David Hartwell pointed out when he bought it for Year’s Best Fantasy.

Just heading to the train station to pick up Laura Anne Gilman, AKA L.A. Kornetsky. She will be reading from her debut mystery Collared tonight, Thursday, November 15, at 7:00 p.m. at Murder by the Book on Hawthorne.

“In a departure from her fantasy series, written as Laura Anne Gilman, L.A. Kornetsky has begun a new series starring Ginny Mallard, the owner of a private concierge company in Seattle. With the help of a bartender friend and some four-legged, furry friends, she is on the case of a missing person.”

There’s a well-known science fiction trope that if, after years of faithful service, you are led away to a happy existence on the Pleasure Planet and are never heard from again, the secret truth is that Something Awful has actually happened to you (examples: Soylent Green, Logan’s Run).

This leads me to conclude that…