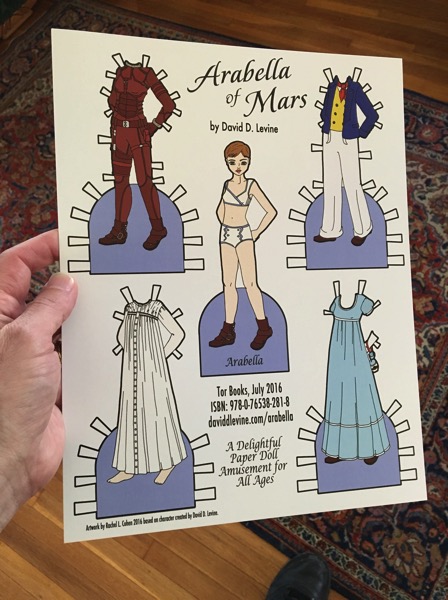 Clothing is a big thing in Arabella of Mars. At the beginning of the book, Arabella is a wild child, running around the desert in a warm, protective, and thoroughly scandalous Martian garment called a thukhong. When her mother finds out, she hauls her back to Earth and makes her dress like a proper English lady — which she hates. Later on she winds up running across the English countryside in her nightdress, and eventually she dresses as a boy and signs on to the crew of an interplanetary clipper ship.

To celebrate Arabella and her outfits, I commissioned a paper doll set from Rachel Cohen of paperthinpersonas.com. It’s done, it looks fabulous (printed in full color on heavy paper), and now, thanks to Tor, you can get one for yourself — free! Here’s how:

If you want a paper doll but can’t pre-order the book, you might have another chance. I will be giving away paper dolls (and other goodies) at my readings to people who dress up, ask questions, or otherwise earn them. :-)

Join Arabella Ashby on her space adventures with this paper doll set. In this alternate history Arabella has grown up on the flourishing British colony on Mars and loves her wild frontier home. Packed off to the stiflingly civilized Earth, Arabella soon discovers that her family is in danger so she runs away and dresses as a boy to join the crew of the flying ship Diana. She must learn to sail the skies, weather the naval war raging between Britain and France, and deal with a mutinous crew if she hopes to save the day. From her Martian hunting clothes to her proper lady’s gown this paper doll features outfits from all of her adventures in Arabella of Mars, on sale from Tor Books July 12, 2016.