For three days before the Worldcon, I participated in a Papal Election Simulation, held in the beautiful Rockefeller Chapel at the University of Chicago. 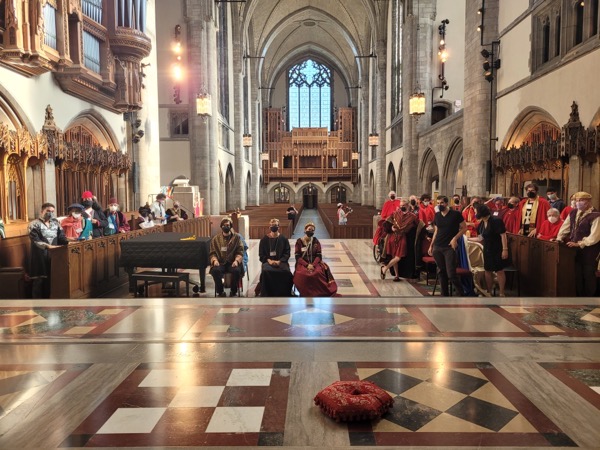 This was a live-action role playing game (LARP) recreating the papal election of 1492. There were about 50 players and several dozen orchestrators and non-player characters. SF writer Ada Palmer, who is also a professor of history at the University of Chicago, has been running this simulation with her students for some years now, and as the Worldcon was in Chicago this year she offered a compressed version of it (it usually runs two weeks) for people coming to the con and other interested parties.

Each of us players filled out a questionnaire beforehand indicating what sort of character we’d like to play and how much time we were prepared to devote to the experience (major characters didn’t get a lot of sleep). We were sent over a hundred pages of background material and rules, including a detailed character sheet (mine was 14 pages) describing our character’s personality, alliances and enmities, special abilities and posessions, and personal goals. We were instructed that to completely embody our character was the object of the game, even if we didn’t achieve our character’s goals.

My character was Cardinal Ippolito d’Este, a noble from the duchy of Ferrara. Ferrara was small but strategic, being located between Venice and Rome, and critical to maintaining the peace between those two powers as well as helping to defend Italy from invaders from the east. Because of this strategic importance, Ferrara was everyone’s friend, well supplied with resources from both Rome and Venice, and generally peaceful and prosperous. My goals in the simulation were largely to maintain the status quo: 1) work to elect a pope who would support Ferrara, 2) support my aunt, Queen Beatrice of Hungary, who desperately needed money to defend Hungary from the Turks, 3) find a good wife for my widowed brother Alfonso, the duke of Ferrara and one of the most eligible bachelors in Europe, 4) protect my sister Beatrice, duchess of Milan, and 5) advance my own prospects. (Yes, there are two Beatrices in there. There were not nearly enough unique names in the Renaissance.) Personally, I was to carry myself as a high noble should, ambitious but polite, and ruthless only out of public view.

We arrived and were provided with lovely costumes (but beastly hot, with temperatures in the 80s and 90s and the chapel not being air-conditioned) and a fat envelope of cards representing money, possessions (everything from a castle to a piece of cake), special abilities, courtiers and servants, and any relatives to be married off. 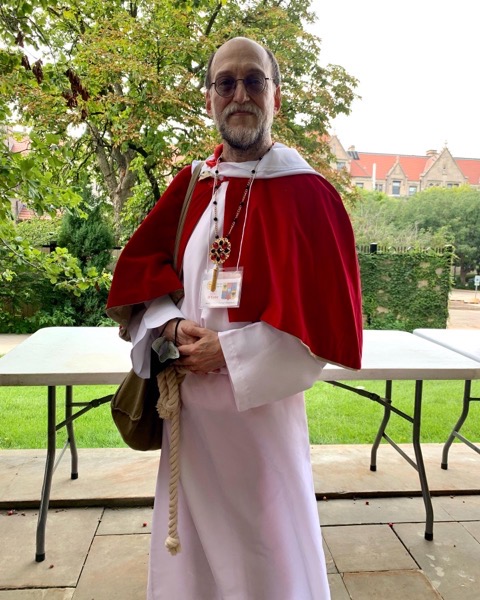 The first half-day of the simulation I spent feeling utterly lost, overwhelmed by the vast number of details and options, and trying desperately to figure out which of these people in cardinals’ robes and COVID masks was my best friend and which my worst enemy. (We did have name tags, and there were significant differences in costume that helped.) But by the end of the day I had found my feet and made good progress, and in particular I had set up a marriage between Alfonso and Joanna the Infanta of Castile, an excellent match which would create a strategic alliance between Ferrara and Spain. All that remained was to work out a few details about the dowry; the union would be finalized (meaning that Jo Walton would affix the cards representing the bride, groom, and dowry to the marriage contract with the Holy Stapler) first thing in the morning. I spent the night strategizing about how to exploit the relationship.

The next morning: disaster! I had a huge pile of mail, including a bloodstained letter from my brother the Duke which said, in effect, “It was, it was, it was… aaaaaaargh.” My brother had been assassinated by his younger brother Fernand (who had always hated Alfonso and me), who now squatted on the throne. So much for the alliance with Spain! 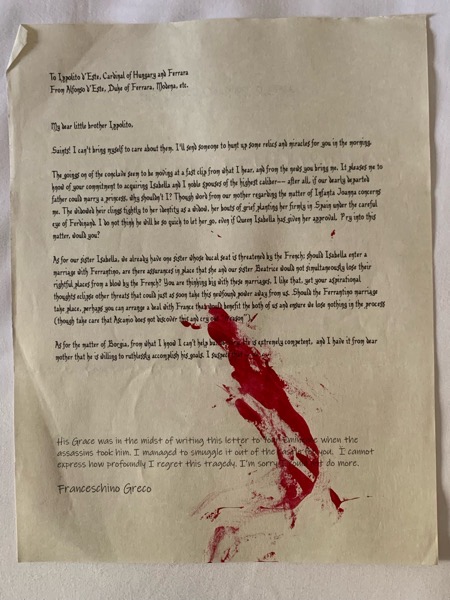 I spent the morning in an absolute tizzy, all my plans dashed and not even certain of my personal safety. Fortunately my many allies, especially Venice, provided me with weapons, guards, and even an antidote-to-poison card. Once I got my feet under me again, I sent every assassin I could scrounge up against Ferrand — hoping to reclaim Ferrara via a near-bloodless coup d’etat rather than a bloody counterrevolution (which was definitely an option on the table). While awaiting the results of that project, I was successful in making a new marriage contract between my sweet but simple younger brother Sigismundo and the young Catherine of Aragon, thus restoring the planned alliance with Spain. If I could eliminate Ferrand, that would make Sigismundo the duke, with Catherine as the real power behind the throne.

During all this, of course, negotiations and horse trading were going on about who would get to be pope. I started off fairly neutral, casting my first few votes for Sforza of Milan in hopes of protecting my sister there, but as time went on I wound up forming closer and closer ties with Rodrigo Borgia. Being a Spaniard, he was my go-between with Spain and was essential to both marriage contracts. I got him to sign a nonaggression pact with Ferrara. Time was pressing — if we went on too long without electing a pope, the always-fractious Roman Mob would rise and the Ottomans would be tempted to invade — and it seemed that Borgia was coalescing as a likely candidate, meaning that supporting him would increase the chances of a rapid conclusion to our unstable popeless state. And the cherry on the top was that he presented me, as a goodwill gift, with evidence of a crime on my part (I had had my bastard half-brother’s eyes gouged out after an argument over a woman) stolen from the files of the Inquisition. I supported him loudly and he won the election with the slimmest possible majority (16 votes out of 31).

Once the pope was elected (“Saw your smoke, now you’re pope, congrats!”) we had the gala Papal Coronation, with the monarchs of Europe in attendance in all their finery. (Up until this point in the simulation they had been in a room in the basement, communicating with the cardinals locked in the Sistine Chapel via Discord secret messages passed in and out via the kitchens and toilets.) Once the pope was crowned he held his first audience, in which his new cabinet was announced, saints were canonized, and petitions were granted. I was rewarded for my support with a seat in the pope’s inner circle and the bishopric of Ferrara (which should have been mine all along, but had been given to an enemy of mine by the previous pope). And I obtained the assistance of the new pope’s Captain of the Papal Guard — also a skilled assassin — in the permanent retirement of the hated Fernand, putting little Sigismundo on the ducal throne of Ferrara. All was right with the world.

Immediately after the Papal Audience, all Europe was plunged into war. We had a very brief time to organize ourselves, swapping cards representing armies and artifacts and deciding where we, personally, were going to spend the war, before breaking for a long lunch. During lunch the orchestrators worked out the results of the war based on the various powers’ numbers of armies, instructions to armies, and status (a high status, conferred by such things as significant courtiers, magnificent architecture, holy relics, and being the home of a saint, would greatly increase a power’s chances of success in war).

As I was not a military commander myself, and with the hated Ferrand out of the picture, I could sit out the war in Ferrara which was likely safe from attack. So I spent the lunch break visiting the nearby site of the world’s first nuclear fission reaction with my old pal Bill Higgins (Cardinal Da Costa of Portugal) and Cardinal Carafa of Naples. 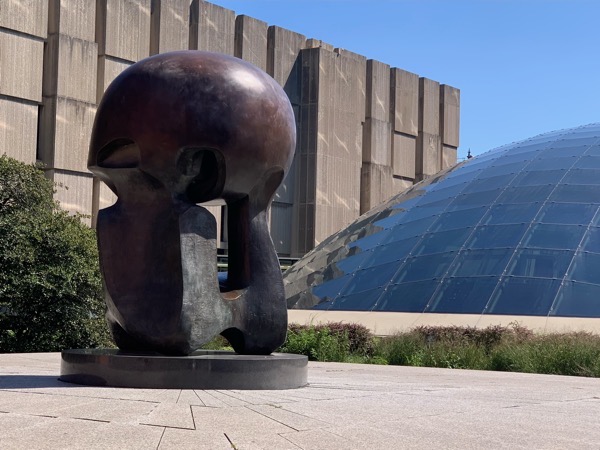 After lunch the results of the war were announced: France, and the hated Cardinal Della Rovere (who had been the instigator of the plot to kill my brother), had been victorious in nearly every battle, capturing huge swaths of territory and many important personages including the Holy Roman Emperor and, alas, the duke of Milan and his wife my sister. However, Rome, Venice, and Ferrara had not been attacked, so I and my main allies were fat and happy.

We spent the last afternoon sorting out the results of the war, trading favors and territory in order to recover hostages and restore some kind of stable order. My aunt the Queen of Hungary managed to ransom the Emperor Maximilian — who handed over Burgundy, Milan, and Naples to the French to obtain his freedom — and then married him, unifying the Holy Roman Empire with Hungary and in effect creating the Austro-Hungarian Empire 400 years early.

Thus the simulation ended. Ada gave a brief overview of how history would likely run after the changes we’d wrought in the timeline — the Reformation, for example, would probably happen at about the same time but Galileo would likely be executed as a young man, or at least not get tenure — and then we broke for dinner, during which all secrets would be open for discussion.

That’s when I found out that I, with all my tragedies and victories, had been not much more than a pawn in the greater game. There were enormous strategic struggles going on around the Borgias, who had actually stolen the election with a forged ballot. The narrowness of the pope’s victory had lowered the status of Rome, which had been the decisive factor in several of France’s military victories. Cesare Borgia had been the literal Angel of Death, which was understandably very significant to his many political victories. (He wound up as king of the new kingdom of Romagna, forcibly created from several of the Papal States — which he invited Ferrara to join, but I politely declined, and he respected that. He could have used his power on me, but didn’t, probably because I’d been supportive of the Borgias, and so Ferrara remained independent.) There had been many, many hidden identities, strategic betrayals, and subtle machinations going on of which I had been completely unaware. There had even been a whole separate game going on amongst the angels, invisible to us players.

So my character wound up rich, powerful, and content, having achieved virtually all of his personal goals, but I felt a little sad at not having been more significant. Mind you, I respect the orchestrators’ decision to place me in a comparatively minor role, given that I was not as familiar with the real history as the students for whom the simulation was designed and that I had indicated I was not willing to devote myself to the game 24/7. And I had a ton of fun, with several literally heart-pounding moments as I attempted to negotiate a marriage contract or assassinate my evil fratricidal brother. (Aside: at one point during a lunch break someone was passing around a tray of Turkish Delight. I grabbed a piece, saying “I’d do anything for Turkish Delight!” which got a good laugh, and someone asked “but would you betray your siblings?” This was particularly amusing given that I had just put out a contract on my brother.)

I think I may have caught the LARP bug.