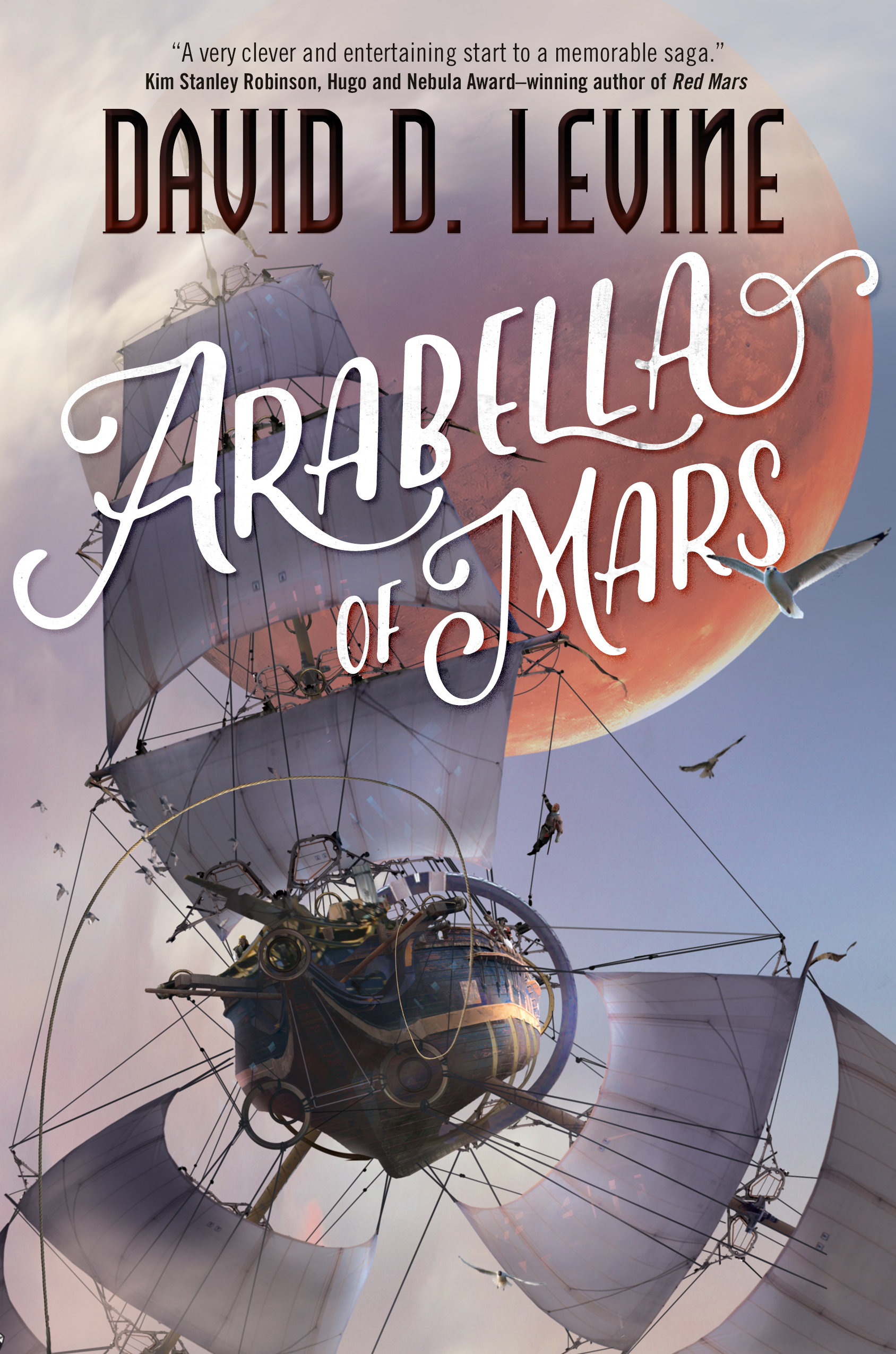 Arabella of Mars is published by Tor and is now available in hardcover, ebook, and audio formats from Powell’s or anywhere else books are sold.

Advance Praise for Arabella of Mars

“Arabella, a human teenager born on Mars, is catapulted into adventure in a tale that cleverly combines some of the most intriguing elements of steampunk and classic science fiction. In an alternate 1812, Arabella’s mother moves her three daughters to Earth and away from the wild influences of the Martian colony. When the family gets news that Arabella’s father has died on Mars, the headstrong 17-year-old girl disguises herself as a boy and hires on with one of the great ships that sail the solar winds between the planets, planning to protect her brother, who’s still on Mars, from treachery. Along the way, she faces privateers and mutiny, but Arabella is resourceful and courageous, gamely enduring hardship to accomplish her mission. Arabella is a fully realized character, daring and willing to risk everything to protect the brother she loves and the legacy that her father has left them. Her wits and cleverness save the ship and crew more than once in this rousing swashbuckler.”
— Publishers Weekly, starred review

“Debut of the Month. Embedded in the chaos of clockwork and space adventure, Arabella is a delightful heroine with more than enough fortitude to traverse the solar system. … A fanciful romp through a cosmic 1812, Hugo Award–winning Levine’s first novel is a treat for steampunk fantasy fans.”
— Library Journal, starred review

“Excellent, entertaining, humorous scenarios make up Levine’s latest. His storytelling will keep readers turning the pages with its slight edginess, light-hearted tone and clear, crisp dialogue. Arabella is strong, sassy and clever, and her journey, as she makes her way back to Mars on an airship, makes this story an engaging read. ★★★★”
— Melanie Bates, RT Book Reviews

“David Levine has reached back past the Martian romances of Percival Lowell to an even earlier moment, creating a precursor to steampunk that I suppose we should call sailpunk. It’s a delightful addition to the Matter of Mars, bridging the long gap between Kepler and Burroughs with a Regency entry, filled with all the drama of the Napoleonic wars, now here complicated by a drastic Martian intervention, and animated most of all by Arabella, a young woman filled with curiosity and courage. It’s a very clever and entertaining start to a memorable saga.”
— Kim Stanley Robinson, author of Red Mars

“Regency space opera in its best form! An intrepid, intelligent heroine, wonderful characters, and a breathtaking conflict. Who could ask for more?”
— Patricia Rice, bestselling author of Regency romances

“If Edgar Rice Burroughs, Jules Verne, and Patrick O’Brian had sat down together to compose a tale to amuse Jane Austen, the result might be Arabella. So. Much. Fun!”
— Madeleine Robins, author of the Sarah Tolerance series

“Hugo award winning author David D. Levine’s first full length novel, Arabella of Mars, is the delicious love child of Jane Austen, Patrick O’Brian, and Jules Verne! Sent back to England from her family’s estate on Mars, Arabella despises the life of a staid young Regency lady. Then a shocking threat to her family on Mars forces her to undertake a desperate, impossible journey back to the colony–a journey that will change her forever. Arabella Ashby is a great character, and wonderful worldbuilding, tight plotting, and a breakneck pace make Arabella of Mars a real page turner! I look forward to the next book in the series.”
— Mary Jo Putney, bestselling author of Not Always a Saint and Once a Soldier

“Levine has created a wonderful alternate 19th century, with interplanetary airships, space pirates, automatons, Martians, and a young woman determined to save her family. This book reminded me how much fun reading can be. This book makes me want to take an airship to Mars. Right now. Arabella of Mars is a perfect blend of pulp and steampunk and old-fashioned adventure, set in a fascinating alternate version of our solar system.”
— Jim C. Hines, author of the Magic ex Libris series

“David Levine takes the ‘girl disguises herself for nautical adventures’ story into new dimensions with this delightful interplanetary romance. Murderous relatives, alien culture clashes, a dashing romance, and high seas adventure in the void between Earth and Mars — it’s all the good parts of the old pulp style, updated for the twenty-first century.”
— Marie Brennan, author of the Memoirs of Lady Trent series

“David Levine’s entertaining debut is a delightfully detailed airship adventure, complete with romance, pirates, Martians, automata, and a charming Jules Vernian imagining of the alternate-world science involved in sailing a ship straight through our solar system.”
— Tina Connolly, author of the Ironskin trilogy

“Interplanetary pirates! Imperiled inheritances! Disguises! Rebellion! Romance! Arabella of Mars is a blast — a smart, resourceful heroine, a non-stop adventure packed with thrills, charm and surprises, and a fascinating world I hope to see a lot more of. A thoroughly engaging debut.”
— Kurt Busiek, writer of Astro City

“Fans of tall ships, steampunk SF, and swashbuckling adventure should love Arabella’s splendid race back to the Mars Colony in alternate 1813! This is a terrific novel!”
— Sherwood Smith, writer of fantasy, historical romance, and science fiction

“Arabella of Mars is a perfect blend of Regency romance and imaginative, exciting space opera. Levine offers a story grounded in historical detail that soars to new heights of adventure and fun.”
— Michael J. Martinez, author of The Daedalus Incident

“This rollicking interplanetary adventure captured my heart. Who could resist a world in which coal-powered ships sail to Mars, borne aloft by balloons of Venusian silk, doing battle en route with French privateers? To protect family and fortune, Arabella Ashby masquerades as a boy and takes a berth as a cabin boy on a fascinating voyage. There’s a mysterious captain, an intriguing automaton, pirates, Martians, a bit of romance, and so much more. I’m grateful Levine has promised a sequel. Arabella Ashby proves herself to be a clever and capable heroine, and I’m looking forward to her next adventure.”
— Pat Murphy, author of Wild Angel