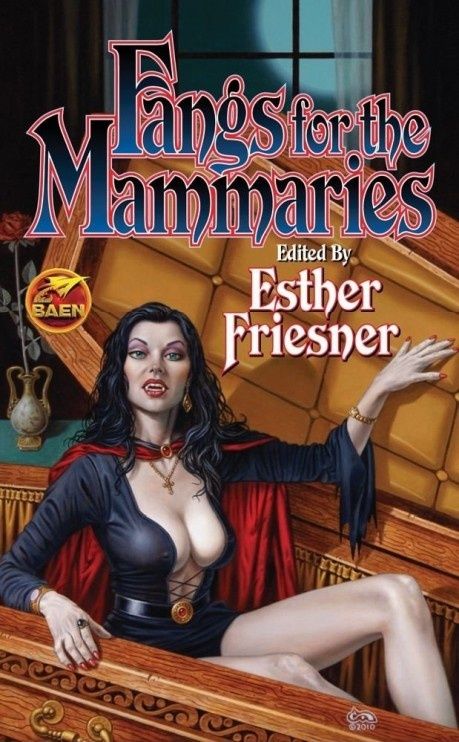 This is the third, and so far final, story of Julian the teenaged witch, sequel to “Midnight at the Center Court” and “Overnight Moon.”

With this story, as with the other two (and many others), I faced the problem of the themed anthology. Many stories that involve vampires and werewolves are, to some extent, mysteries. But in an anthology of vampire stories, if you have a mysterious death or a peculiar, pale stranger there’s absolutely no question in the reader’s mind as to what the secret behind it is. My approach to this problem is to put the vampire or werewolf on stage right up front, and skip over the mystery to the question of “okay, you’ve got a vampire, now what kind of mischief can we get into?” So this vampire story is really a story of teenage love (or something like that) in which one of the characters just happens to be a vampire.

Not that there’s anything wrong with that.

The two of them headed out the door and down the stairs to the sidewalk, Julian flipping up his hood and Daciana putting on her sunglasses and popping open a big black umbrella.  Even on a gloomy overcast day, Daciana always wore sunglasses outside.

Daciana and her family were vampires, refugees from the Ceauşescu regime’s secret crackdown on all sorts of supernatural creatures in Romania.  Every coven in America was helping vampire immigrant families get settled, and Julian’s coven had two: Daciana’s family here in Lakeshore, and another in the nearby suburb of Alewife Bay.  Julian’s mother had taken on assisting Daciana’s family as a special project.

Real vampires weren’t nearly as fearsome as the legends suggested.  True, Daciana was pale and sensitive to sunlight, and there was the turning into a bat thing.  But she had never shown any desire for human blood — though the always ordered her burgers at the Youth Center extra-rare — and she reflected in a mirror like anyone else.  “How else could I do my make-up?” she’d joked, though Julian had thought that she didn’t look like she needed make-up.

Before speaking, Julian sketched a sigil on the tabletop with his finger and muttered an incantation:  Hermes’s Secrecy, which would prevent any eavesdropper from hearing anything but an indistinct mumble.  “You’ve probably heard about the football team,” he said after the spell had taken effect.

“I have.”  Daciana took a sip, trying to act nonchalant, but Julian noticed that her hand trembled as she raised the cup to her carmine-red lips.  “But you know me.  I would not — ah, how do you say… hurt a fly.”

Julian swirled the chocolate in his cup.  “I’m afraid the coven is going to want proof.”

“But how can I prove I didn’t do something?”

Daciana took a sudden breath.  Athena’s Inspection was a powerful spell that could reveal the truth of anyone’s statements, even their innermost thoughts.  It was a difficult, painful, and disruptive spell to undergo, and could even do permanent damage..