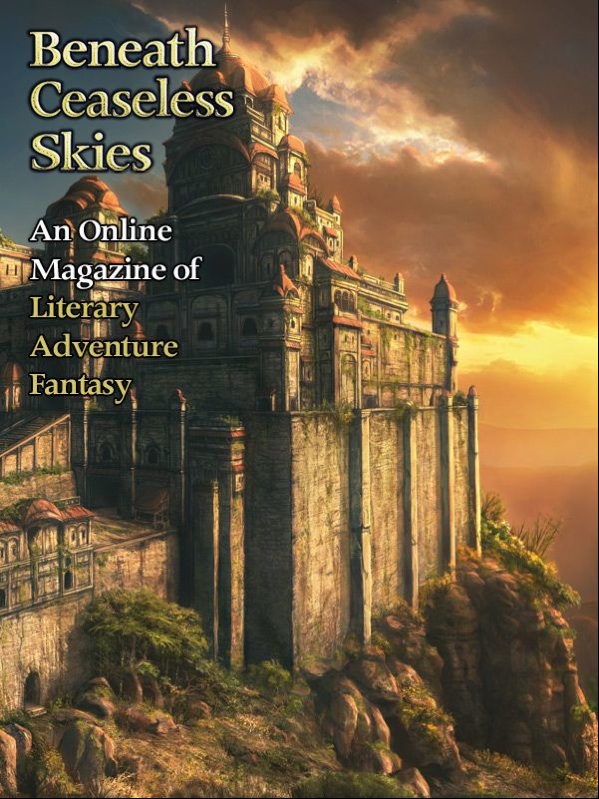 This story grew from the following kernel: what if relationships were visible? What if your romantic relationship with another person were an undeniable, physical thing, whose appearance would indicate the state of the relationship? How might that affect the way we live our lives, or the way society is structured?

I decided to set the story in a community of artists, whose relationships tend to be frequent, deep, complex, and fraught. For some reason this suggested to me the Belle Époque in Paris, circa 1907. Everything else in the story grew from there.

I’m intrigued that Beneath Ceaseless Skies describes this story as steampunk. When I was writing it I thought of it primarily as a romantic fantasy; the electrical gizmos in the story, I thought, were just props. But of course all of these elements do add up to something steampunkish, especially given that I subtitled it “a scientific romance.”

This isn’t the first time I had no idea what kind of story I had written until it was published. I thought “Nucleon” was hard SF, an alternate-universe story about an atomic car. I even sent it to Analog. But it turns out it’s actually a fantasy, a variation on the well-known “mystery shop” trope, as David Hartwell pointed out when he bought it for Year’s Best Fantasy.

“Quite charming. The galanteries are a happy creation, very French, as is the solution.”
— Lois Tilton, Locus Online

“[A]n excellent example of some of steampunk’s most charming traits… I loved the way it explored different types of love, and how the characters found the satisfactory ending I’ve wanted from many a romance plot.”
— Sean Aldous, Rise of the Brass Army

The Tuesday night salon was held at the home of Monsieur and Madame Dumouchel.  Zéphine, as usual, was among the last to arrive — between her wretched situation at the stationers’ and the erratic performance of the new electric trams, it was a good week when she made it to the 11th arrondissement before seven in the evening.

This had not been a good week.  It was nearly eight o’clock and Zéphine found herself tired, cross, and starving as she knocked on the tall lacquered door of the Dumouchels’ elegant town house.  But, as always, Mme. Dumouchel greeted her with a warm “enchantée de vous revoir” and, even more welcome, a tray of delicate pastries.  Zéphine selected several of her favorites, working hard to savor each bite despite the fact that they would serve as her entire supper.

The salon was already in raucous full swing as she followed Mme. Dumouchel through the double doors into the living room, Mme. Dumouchel’s galanterie for her husband padding contentedly along beside them.  It was a docile little thing, with a cute pug nose and large soulful eyes, and Zéphine could not fail to notice with a pang of envy how similar it was to its counterpart, M. Dumouchel’s galanterie for his wife, which dozed placidly at M. Dumouchel’s feet.  The two creatures were as alike as two little peas in a pod, reflecting the comfortable stability of the Dumouchels’ marriage.  As Mme. Dumouchel settled into the chair next to her husband, the two galanteries merged without the slightest fuss into a single creature that looked exactly the same.

Zéphine sighed at the charming domestic tableau.  Her own last romantic liaison had produced an ill-starred pair of galanteries — her galanterie for her beau had been sleek and black with pointed ears like a fox, while his for her was a mangy gray thing resembling a cross between a wildcat and a basset hound.  Upon meeting, the two galanteries had circled each other warily before merging into an awkward, lopsided creature that seemed ill at ease with itself.  Perhaps it should not have been a surprise when the relationship ended after only four months.

She shook off the dispiriting memory, drew a cup of coffee from the urn, and settled herself on one of the remaining open chairs, content for now to listen and observe…