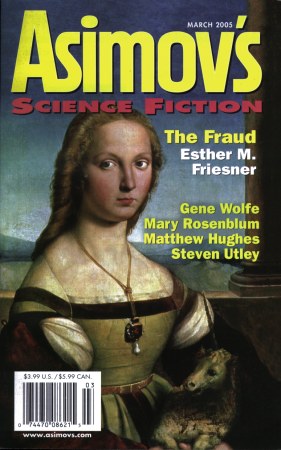 One of the things I tried to do in “The Tale of the Golden Eagle” was to show a great depth of time, as in the stories of Cordwainer Smith. In “Tk’Tk’Tk” I tried to show a great depth of space, as in the early SF stories of George R. R. Martin. I’m a great admirer of those stories — which you can find collected in A Song for Lya and Other Stories, Songs of Stars and Shadows, and Sandkings — because they show space as a scary and deeply weird place. What I wanted to do with this story was to take an ordinary man and send him so far away from Earth and so far outside his comfort zone that he is in danger of dying from pure culture shock.

This is another story in the classic mode, which reflects the fact that I grew up reading the greats of the Forties and Fifties. I hope it also includes a modern sensibility; I tried to incorporate some of the things I’ve learned about meditation and relaxation and coping with stress. And, as you might expect, a lot of this story comes out of my travels in other countries.

I’m proud to say that I managed to sell this story to Gardner Dozois before he retired (Sheila Williams had taken over as editor by the time it appeared). Thanks to James Patrick Kelly for the perfect title.

And, although “tk’tk’tk” is difficult to pronounce without mandibles, when you tell your friends how wonderful this story is you can say it “tick-tick-tick.”

By the way, the Polish edition of this story included four great interior illustrations.

“Asimov’s for March contains a gloriously old-fashioned story of incomprehensible obsequious aliens giving a human trader the run-around: ‘Tk’Tk’Tk’ by David D. Levine, who appears very fluent across a multitude of SF subgenres. Writing somewhat in the mode of Jack Vance’s classic novella ‘The Moon Moth,’ Levine puts his harassed computer salesman up against insectoid beings with bizarre codes of decorum and business ethics, a language of custom and evasion the poor commercial traveler only slowly begins to fathom; the act of translation becomes a conceptual breakthrough, leading in an unexpected and yet curiously inevitable direction. One can speculate that Levine’s Walker is ultimately wiser in his choice of accomodation to the exotic than was Vance’s Edwer Thissell; but whatever the conclusion, ‘Tk’Tk’Tk’ is a skillful confection, another token of its author’s burgeoning virtuosity. … Recommended.”
— Nick Gevers, Locus

“In the March Asimov’s I appreciated David D. Levine’s ‘Tk’tk’tk’, about a salesman struggling to stay afloat on an alien planet where the culture spins him so off-balance he finds himself re-orienting. Do you ever find out what ‘Tk’tk’tk’ means? Read it and you may see; sometimes you have to let go of your goals in order to accomplish them.”
— Anne KG Murphy, Emerald City

“There is a sort of old-fashioned Orientalness to these aliens, which makes it fitting that Walker would be an old-fashioned travelling salesman. … But when Walker cracks the alien code, so to speak, it transforms more than just his mission. Levine brings in Eastern spiritual elements to give the story an added dimension: understanding the other as the key to understanding the self.”
— Bluejack, Internet Review of Science Fiction

“[T]akes a premise that seems very “Golden Age”… but gives it a very 21st-century sensibility. In the Golden Age, the salesman would have proved the superiority of Earth culture, or would have been shown to be venal and deserving of being bested, or something equally simplistic. Levine adds some layers to the story.”
— Evelyn C. Leeper, MT VOID

“The alien world was vividly imagined, the holiday, everything. Anywhere Levine decides to take me, I’ll believe I’m there.”
— Rebecca Gold, Tangent Online

Walker’s voice recorder was a beautiful thing of aluminum and plastic, hard and crisp and rectangular. It sat on the waxy countertop, surrounded by the lumpy excreted-looking products of the local technology. Unique selling proposition, he thought, and clutched the leather handle of his grandfather’s briefcase as though it were a talisman.

Shkthh pth kstphst, the shopkeeper said, and Walker’s hypno-implanted vocabulary provided a translation: “What a delightful object.” Chitinous fingers picked up the recorder, scrabbling against the aluminum case with a sound that Walker found deeply disturbing. “What does it do?”

It took him a moment to formulate a reply. Even with hypno, Thfshpfth was a formidably complex language. “It listens and repeats,” he said. “You talk all day, it remembers all. Earth technology. Nothing like it for light-years.” The word for “light-year” was hkshkhthskht, difficult to pronounce. He hoped he’d gotten it right.

“Indeed yes, most unusual.” The pink frills, or gills, at the sides of the alien’s head throbbed. It did not look down — its faceted eyes and neckless head made that impossible — but Walker judged its attention was on the recorder and not on himself. Still, he kept smiling and kept looking the alien in the eyes with what he hoped would be interpreted as a sincere expression.

“Such a unique object must surely be beyond the means of such a humble one as myself,” the proprietor said at last. Sthshsk, such-a-humble-one-as-myself — Walker could die a happy man if he never heard those syllables again.

Focus on value, not price. “Think how useful,” he hissed in reply. “Never forget things again.” He wasn’t sure you could use htpthtk, “things,” in that way, but he hoped it got the point across.

“Perhaps the honored visitor might wish to partake of a cup of thshsh?”

Walker’s smile became rigid. Thshsh was a beverage nearly indistinguishable from warm piss. But he’d learned that to turn down an offer of food or drink would bring negotiations to an abrupt close. “This-humble-one-accepts-your-most-generous-offer,” he said, letting the memorized syllables flow over his tongue.

He examined the shopkeeper’s stock as it prepared the drink. It all looked like the products of a sixth-grade pottery class, irregular clots of brown and gray. But the aliens’ biotech was far beyond Earth’s — some of these lumps would be worth thousands back home. Too bad he had no idea which ones. His expertise lay elsewhere, and he was here to sell, not buy.

The shopkeeper itself was a little smaller than most of its kind, about a hundred forty centimeters tall, mostly black, with yellow spine-tips and green eyes. Despite its insectile appearance, it was warm-blooded — under its chitin it had bones and muscle and organs not unlike Walker’s own. But its mind and culture were even stranger than its disturbing mouth-parts.

“The cup of friendship,” the alien said, offering a steaming cup of thshsh. Walker suppressed a shudder as his fingers touched the alien’s — warm, covered with fine hairs, and slightly sticky — but he nodded politely and raised the cup to his lips.

He sipped as little as he felt he could politely get away with. It was still vile.