Sunday’s episode of Leverage, “The First Contact Job,” was the first episode of this series that Kate and I worked as extras, and we both actually appeared on screen! We played “members of the science media” in the press conference at the end of the show. Kate’s in several shots, and I appear briefly walking in front of Timothy Hutton. 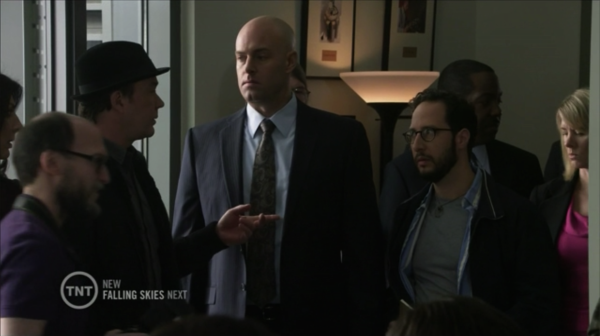 It was a very long day of shooting, with a lot of waiting and quite a bit of confusion. (“Why are you standing there?” “The other guy told me to.” “Well, go somewhere else!”) But the episode was directed by Jonathan Frakes and features a lot of science fiction movie references (including a character called Will Riker). I’m very pleased to be in this one.

Immediately after watching Leverage on Sunday night (we watched it as it aired, of course) we headed down to the Oregon Museum of Science and Industry to watch Curiosity land on Mars. We had hoped to rendezvous there with Jay Lake, but as we were somewhat late they told us the planetarium was full (even though Jay was saving us seats) and we had to watch from the auditorium next door. A standing-room-only crowd of 900-1000 people gasped and cheered as each milestone was successfully passed… it was an awesome geekly experience. The only thing that could have been improved was that the simulation OMSI showed on a second screen, using NASA’s “Eyes on the Solar System” app, was about four minutes ahead of reality, so we saw simulated Curiosity touch down well before the actual moment. On the other hand, once that happened we could give our full attention to the real telemetry data and not be distracted by the shinier simulation.

The other major news at home is that we have decided, rather suddenly, that it is time to pull up our over-20-year-old wall-to-wall carpet and have the hardwood floors beneath refinished. This is a bit of a gamble, as we don’t know what shape they’re in (the carpet was there when we moved in). The refinishers arrive on Monday.

In order to make this happen, we have to pull every stick of furniture out of the living room, dining room, and parlor (guest and TV room), which means that we are spending this week boxing up all the books, CDs, DVDs, and other stuff from those three rooms. We’ll be renting a container, and all that stuff will be in it (on the street in front of the house) for a week. Also during that week we will have to move to a hotel for a few days because of fumes. It’s a big hassle, but I’m sure we’ll like the result.

This is also an opportunity to reconsider and get rid of Stuff. We’ve reduced our collection of LPs by about one-third, we’re getting rid of all our VHS tapes, and I’ve sold off my LaserDisc player and collection of disks. And we plan to take our CDs out of the jewel boxes and place them in sleeves (probably these), reducing the storage space requirements substantially. (Though most of our music is online, getting rid of the CDs completely is not under consideration.) A few books and papers are going away as well.

We’re also going to lose the LP, cassette, VHS, and DVD players and replace the existing tuner and speakers with a Blu-Ray surround sound setup (any recommendations?). The entertainment center we were given by the previous owners of the house will be replaced by something more suited to the flat-screen era. We’re keeping the TV, for now — it’s only a few years old — though with the new entertainment center we’ll now have room for a bigger one.

Finally, may I direct your attention to the Tome of Ideas for Writers and Roleplayers Kickstarter campaign. If funded, this will be a color illustrated book of writing and story prompts from over twenty professional authors including Elizabeth Bear, Seanan McGuire, Kevin J. Anderson, and me! If you’d like to see this happen, go over there and kick in a few bucks.