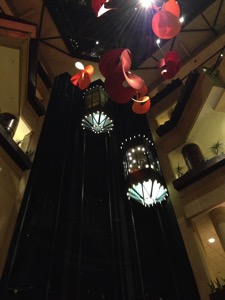 Last weekend I attended the World Fantasy Convention in Washington, DC. Unfortunately, it was the same weekend as my local con, OryCon, and I’d had a tough time deciding between them. But, as it shook out, I made exactly the right choice.

You might think that the difference between the World Science Fiction Convention (Worldcon) and World Fantasy Convention (WFC) is obvious from their names, but it actually isn’t. It is true that WFC focuses on fantasy rather than science fiction, but it doesn’t exclude SF and the Worldcon doesn’t exclude fantasy. The real difference between the two is that the Worldcon is a large (5000 people or so) convention by and for the fans, whereas WFC is a smaller (1000 people) professional conference for writers, publishers, editors, and agents. WFC generally has excellent programming, a dynamite art show, and a dealer’s room focused on books, but the real reason most of the attendees are there is to schmooze. There is a hospitality suite, but the real heart of WFC is the bar where everyone hangs out.

My first WFC was one in Seattle back in the 20th century, when Kate and I helped out our friend Debbie who was running the hospitality suite. We thought it was a great con, but it seemed that there was this invisible web across the con of deals being made, and spending time with our writer friends felt as though we were keeping them from important business. Although fans are welcome at WFC, the con isn’t really about them, and we didn’t go to another WFC for years after that. But WFC changed substantially for me when I started selling my fiction professionally, and became one of my favorite conventions.

This WFC was a whole different animal for me, now that I’m a cog in the publishing machine. I met with my editor (my editor!) Moshe Feder, Tor’s art director and head of tor.com Irene Gallo, and Tor’s head of publicity Patty Garcia (she was bartending at the Tor party at the time, but very generously took some time to chat with me as well). I also bent the ears of many of my writer friends, who offered congratulations and sage advice. Several people commented that I was adorable with my puppy-like enthusiasm, and I have to own that.

I did hang out in the bar, a lot, and had many professional breakfasts and lunches in the hotel restaurant. I think I had five meals outside the hotel in six days, all within walking distance, and otherwise didn’t leave the hotel at all.

I came out of the con feeling like my brain was rattling around in my skull, and I’m still on East Coast time. I have an enormous list of things to do for Arabella of Mars, and #1 on that list is to write the sequel. (I did manage to write every day of the con, even if it was less than a hundred words some days, but I missed a day after coming home when I found myself asleep at the keyboard.)

Publishing is a machine, yes, but it’s a machine made of people, and WFC is where the gears are lubricated. I had a blast and I’m already looking forward to next year’s WFC in Saratoga Springs.