Had a Thanksgiving dinner that couldn’t be beat yesterday, and had lots of fine conversation with some of our oldest fannish friends. It was a good time. We will get through this.

I had wondered what happened during the functional MRI. Kate said that there was first a general MRI (just holding still while the machine banged and thumped), then a finger-tapping exercise (tap a finger for 30 seconds, then hold still, then tap again), then an exercise of nouns and verbs (given a noun, think of the corresponding verb), then an exercise of concrete/abstract (given a verb, think of whether it is concrete or abstract), then another exercise she doesn’t recall. It was all kind of boring and repetitive and some of the tests had to be done over because she dozed off, though they still finished it all up in just under the scheduled two hours.

The answer to the question “how is it that they can ask if you are claustrophobic and also say that you have to be able to read text five feet away??” is that she had an angled mirror in front of her eyes and the words were shown to her on paper cards (some printed, some hand-lettered) held up near her feet.

The paper cards and hand-lettering tell me that the tests vary a lot depending on exactly what brain areas are being examined for the particular patient, and also that this is a very new type of test. This also suggests a reason for the whole deal with the contact lenses — they are still figuring out how to effectively administer this test. Perhaps in five years the prompts will be displayed on a screen and they’ll have a rack of glasses with all-plastic frames in a variety of common prescriptions. 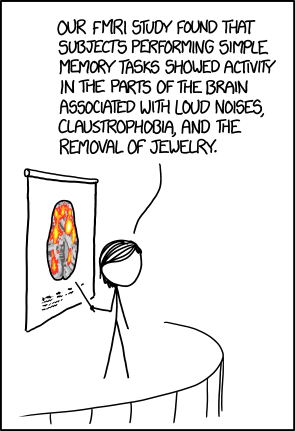