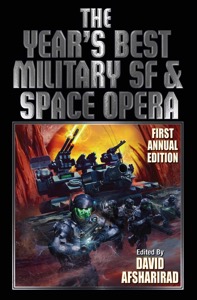 Just heard from David Afsharirad, editor of the forthcoming Baen Books anthology The Year’s Best Military Science Fiction and Space Opera. “I’d very much like to include your story ‘The End of the Silk Road’ in the book. I can’t say how much I enjoyed the story. As a fan of early 20th century detective and science fiction, it was a real treat.”

“The End of the Silk Road” is “Venus noir,” in the mold of C. L. Moore’s “Northwest Smith” stories, with froggy Venusians, a damaged protagonist, love, guns, and betrayal. It’s set in the same universe as my forthcoming novel Arabella of Mars, but where that book takes place on Mars in 1813, this story is set on Venus in 1936. It isn’t “military” in the least, so I assume the title of the anthology is to be read as “Year’s Best (Military SF) and (Space Opera)” rather than “Year’s Best Military (SF and Space Opera).”

The Year’s Best Military Science Fiction and Space Opera, the first in what Baen hopes will be an annual series, will be published as an ebook on May 16, 2015 and in paperback on June 2, 2015. It already has a cover and preorder pages at Amazon and Powell’s.

Baen will also be using the book as a ballot for a new readers’ choice award, to be presented at DragonCon. Voting will be done via online poll. More details as I have them!