Failed to mention in last post: cylinders every few blocks on the street in pairs and threes are municipal garbage “aspirators:” basically they slurp the trash (or compost, depending on which one) away under the sidewalk like a giant vacuum cleaner or pneumatic tube. The chocolate “Minbari” in the photo was actually a monk of a certain order; chocolate is associated with these monks because for a time chocolate (with stimulating properties, but not a “food”) was considered okay to eat during fasts and they came to specialize in it. The chocolate museum was inside a school for pastry chefs, and included views of classes in session (airbrushing, writing with icing, rolling out marzipan) in a huge teaching kitchen with giant windows facing the courtyard.

Walked to Caravelle for breakfast ~8:00, but found it closed, so had coffee and a chocolate croissant at Forn de Betlem bakery. That was not enough, so we walked to Boqueria market for more. The market was just getting going for the day and featured stall after stall of truly beautiful vegetables, meats, fish. We sat at a stall called Kiosko Universal, specializing in seafood, where I ate tortilla (egg & zucchini) with pa amb tomaquet (bread spread with tomato and olive oil) while being stared at by sardines.

Next we took the subway to Sagrada Familia. The ticket machine insisted on a PIN for our credit cards, which we did not have, so we bought our 5-day passes with cash instead. We wound up taking a longer route than was strictly necessary because the shorter route would have involved going up to the surface, across the street, and down again to the opposite track and Kate’s knee is not happy with stairs.

Sagrada Familia is amazing, overwhelming, like a giant alien termite mound plunked down on the city… but we only saw the outside of it because the line was blocks long and the rumored shortcut of buying tickets from a nearby ATM could not be made to work (turns out the rules have changed, you can pick up tickets purchased online, but not buy them, at the ATM). So we bailed and went to Casa Mila instead, stopping at shop Vinçon on the way to look at clever and intriguing designed gizmos & housewares.

Casa Mila, aka La Pedrera (“The Quarry”) is one of Gaudi’s last projects, an amazing organic apartment building. Much of the building is still private apartments, but you can visit the roof, whose mosaic-clad chimneys and stairwells are famous; the attic with its catenary arches; and a top-floor apartment where some contemporary 1905 furniture shows just how alien this place was at the time it was built (it was compared to a quarry, a cliff inhabited by dragons, and a parking lot for alien spacecraft). But, on the other hand, nearby buildings have similar massing and fenestration (sorry, I lapsed into architect-speak, I mean overall building shape and placement of windows), bay windows, and coloration, so that, weird though it may be, in context it’s not as weird as it appears if you see photos of it in isolation.

We hit the wall hard around 1:30 and headed for a nearby restaurant Murmurs (not much connectivity on my phone, I saw that it had 4 stars on Yelp but little else in the way of details) but passed cafe Mauri on the way, and it looked good so we ate there instead. We had a 3-course lunch (vegetables, salmon, cake) which was merely okay, but it was pretty and served quickly in nice surroundings when we needed it. Took a cab back to hotel, where we found the heated towel rack had been turned on, as requested earlier, so washed some sox and underwear then napped until 4:30.

After some discussion about what to do with the time remaining until our show tickets, took the subway to a little magic shop, El Rei del Magica (since 1898!), then bus to Creps Barcelona for a very nice simple dinner of salad and crepes before the show: Pink Martini at the Palau de Musica! Kate had learned just a week ago about this show and when we found we could get tickets we jumped on it.

We arrived at the box office when it opened at 7, but was told to pick up our tickets inside at 8, so we had a drink in the lobby and admired the architecture. There was absolutely no signage about Pink Martini anywhere, but we spotted Thomas Lauderdale smoking and talking on the phone in the courtyard so we knew we were in the right place. Just before 8, I spotted an employee and asked where to pick up our tickets, and was told we’d have to go in the front door, so we walked around the building, but at 8 we saw a line form in the lobby from the door we’d just been turned away from. We were just about to schlep back around the building when the front door did open and we got in line behind all the other people. The line seemed interminable, but it was probably only about 20 minutes until we got our tickets. Where to go from there was unclear, but right then (8:30?) a bell rang and the doors to the hall opened. We were among the first in our seats, and the show started right at 9:00.

The Palau de Musica is a fabulous Catalan Modernist building, full of mosaics and glass — a riot of materials including brick, stone, and wrought iron, and an amazing stained-glass ceiling. The show, too, was fabulous, with Storm Large using the power of pure undiluted sex to have the audience eating out of her lap. Whenever I see Storm performing with Pink Martini I am reminded of She-Hulk’s tenure with the Fantastic Four — she brings such an amazing physicality to her performance, quite different from China Forbes’s cool intellectuality, though their voices are similarly powerful. She performed in a gold lame dress which covered her from shoulders to heels while leaving very little to the imagination, and won over the crowd by speaking in a mix of Spanish and English. Thomas, too, gave a couple of speeches in Catalan, and they invited every native French speaker in the audience up on stage (including a charming little Vietnamese girl) to sing along with the band for “Je Ne Veux Pas Travailler.” Cab back to hotel, got to sleep by 11.

The process of getting the tickets felt messed up and amateurish but, in retrospect, it actually went like clockwork. The problem was that we’d been told box office at 7, doors at 8, show at 9, but the reality was doors (to lobby to pick up tickets) at 8, hall opens 8:30, show at 9 so it all felt terribly disorganized and behind schedule. We also did not know that the hall was actually quite small and could easily be filled in half an hour.

Wednesday 10/23: Awake about 8, breakfast in hotel by 9, writing in our diaries at the table til 9:30. Plan for the day: Catalan history museum, obtain Sagrada Familia tickets for tomorrow, maybe a stitch-and-bitch at a local yarn shop at 5.

Getting those tickets wasn’t easy, but after great struggle, we managed to defeat the combined forces of Ticketmaster and La Caixa. You have to go to ticketmaster.es to order and pay for the tickets, then find one of the ATM machines of bank La Caixa that has the “print your tickets” feature (not all of them do, and the website that lists them is entirely in Catalan and covers the entire country), and then — this is the bit that took over half an hour to figure out — you must insert your card in the machine before doing anything else (you can begin the process by touching the screen, but if you do this you will not have an opportunity to insert your card later). The process is complicated by the fact that, although La Caixa brags about their multilingual ATMs, many key screens are only available in Catalan and there is considerable foofaraw around “mini cards” which will not fit in the machine. Also, the whole procedure has changed recently and will change again (maybe to go away completely) after January 15.

Having obtained the tickets, we took a bus to the Catalan History Museum, which is very well laid out and informative. We toured 3/4 of one floor (of two floors of permanent exhibition, never mind the two additional floors of temporary exhibits) before hunger compelled us to seek lunch. As we were right on the seafront, we wanted seafood, and though bar El Pescador (The Fisherman) was right there and got good reviews it had no seafood on the menu, so we proceeded to our second choice: Can Majó (on Almirall Aixada, which we of course called “Admiral Ackbar street”) for a delectable (though expensive) lunch of gazpacho, salad of green beans and ham, and paella. Everything was top-notch, but I think we are agreed that we don’t need to order paella again; it’s too salty, too fishy, and too difficult to eat.

Back to the museum for the rest of Catalan history. The museum was only about 8 blocks away, but we seriously debated taking a cab for the sake of Kate’s knee; we wound up hoofing it, but probably should not have. We learned a lot about the Catalans, including their predilection for backing the wrong side. They backed Carlos (vs. Felipe) in the Wars of Spanish Succession and for this they lost their independence for nearly 300 years. They also wound up on the wrong side of Franco, and many others, but they got self-rule back in 1980. And we got to stand inside a life-size section of one of the first submarines, a Catalan invention.

Done with museum around 4:00. Took the bus to Granja M. Viader, a cafe and deli famous for the local specialty of hot chocolate and churros (since 1870!). A nice reviving snack, but frankly I’ve had better hot chocolate; we will have to try some others. Also bought some yogurt for tomorrow’s breakfast. Back on the bus 2 more stops to the hotel, where we dealt with photos etc. and napped until about 8.

Not very hungry, we walked to nearby bar Elizabets for a little nosh of tapas before bed. A happenin’ place in a happenin’ neighborhood. I’m getting bolder with my Spanish, even though most tourist professionals speak at least some English and my Spanish is kind of approximate, it feels good to communicate in one of the local languages. We had pimientos al padron (mildly hot green peppers fried and salted), pulpos a la Gallega (tender, spicy slices of sauteed octopus tentacle), pinchos morunos (skewer of spicy, tender pork served with crunchy toast), and a plate of manchego cheese which, of course, came with pa amb tomaquet, all washed down with a bottle of cider. Probably more than I should have eaten, but so tasty. We did save some of the cheese and bread for tomorrow’s breakfast. Back to room for blogging etc. at 11:00; to bed around midnight.

Oh, one last note before the photos: the Catalan word for “market” is mercat (pronounced “meerkat”), and, of course, a supermarket is a supermercat. I keep thinking of Laura Anne Gilman. 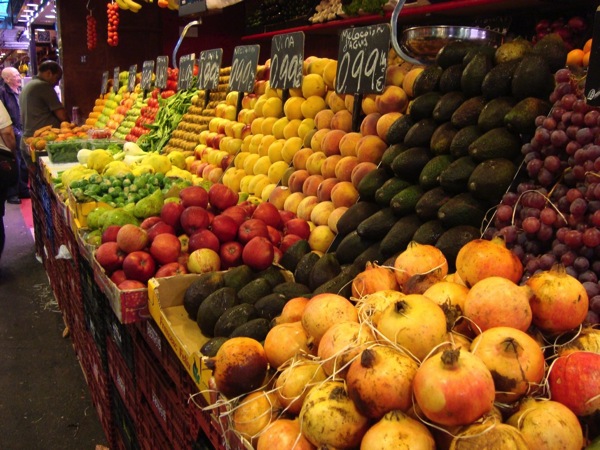 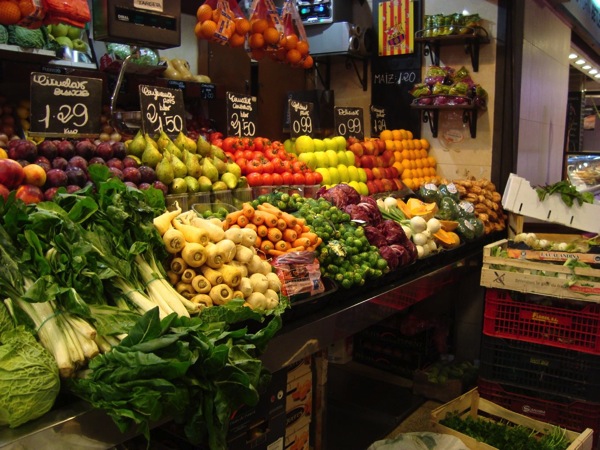 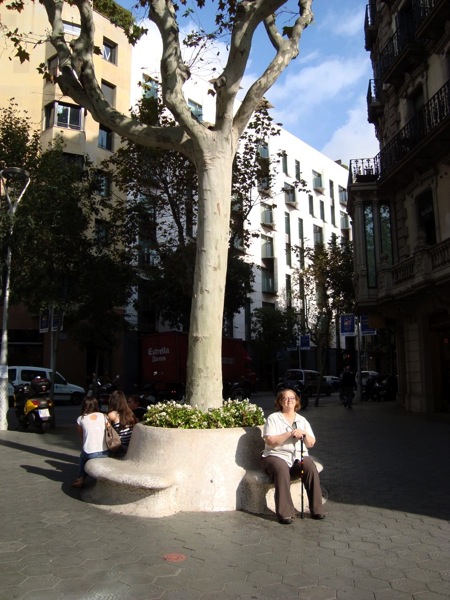 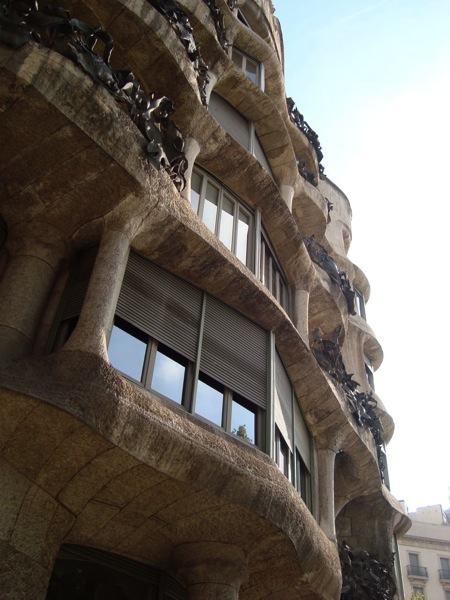 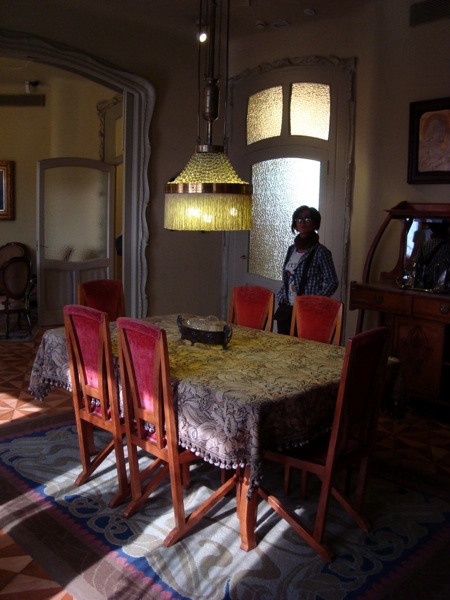 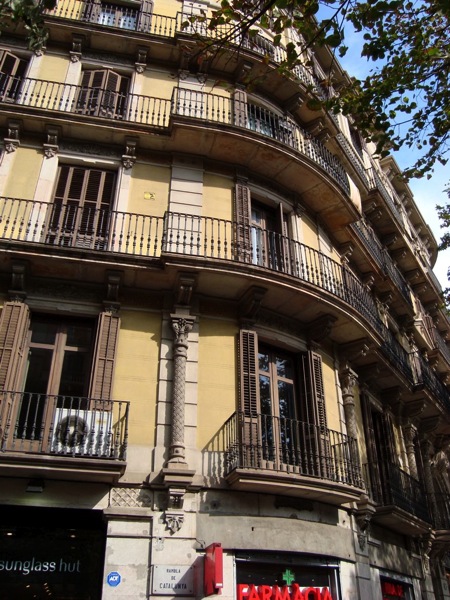 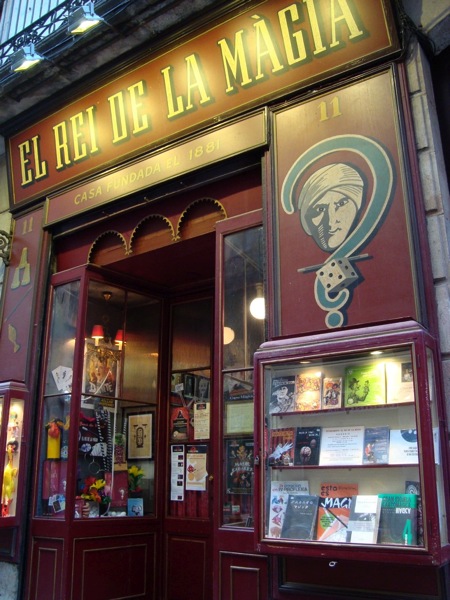 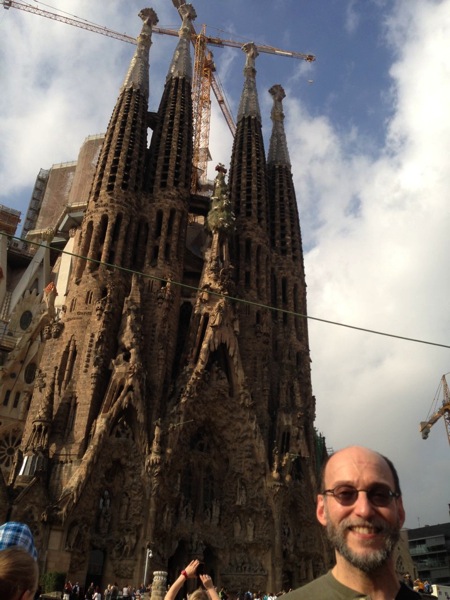 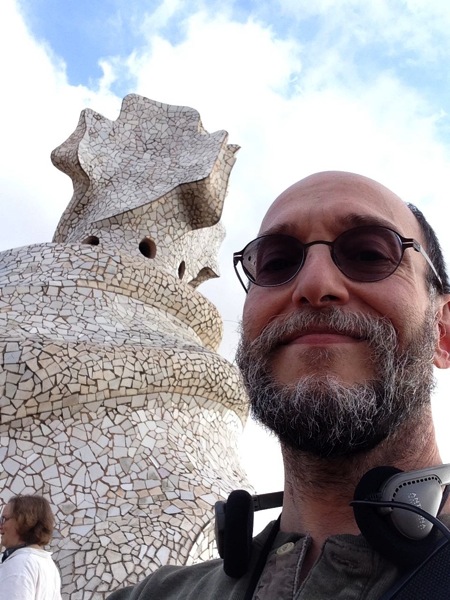 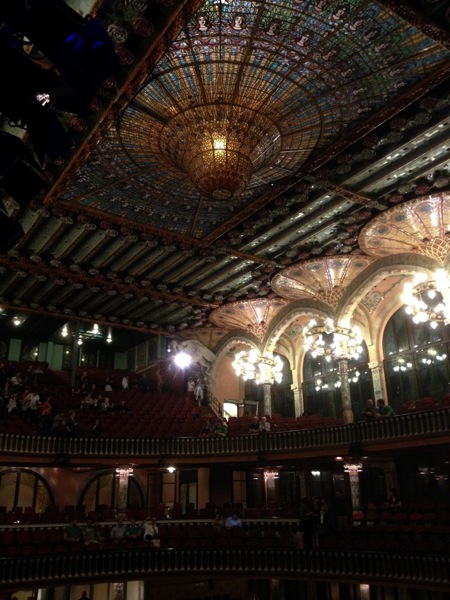 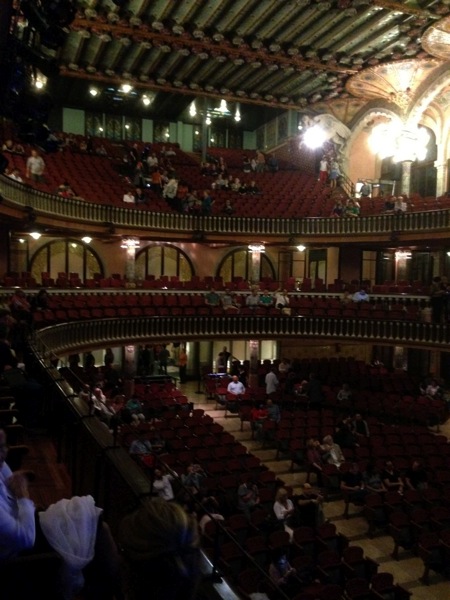 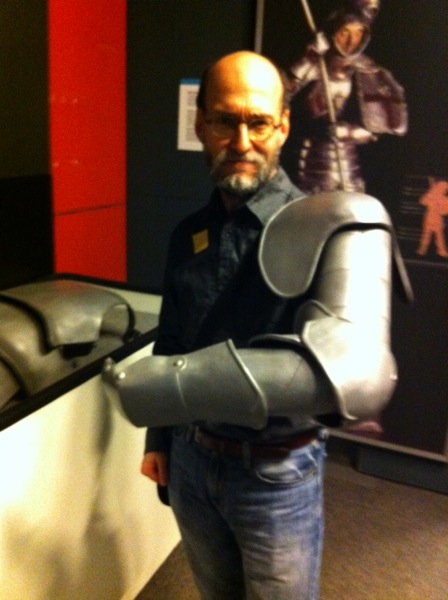