(Not Really) A NaNoWriMo Success Story

At the beginning of NaNoWriMo I started a new novel with nothing more than a one-paragraph pitch, intending to do the whole thing by the seat of my pants (I’d never “pantsed” a whole novel before). Yesterday I sent a finished draft, about 102,000 words, to my agent.

In a Solar System well inhabited by humanity but far from settled, a gang of grifters and thieves — the scattered survivors of a big job gone very wrong ten years ago — must reunite to break the gang’s erstwhile leader out of captivity. But after ten years, no one is who they were… and some are not what they seem.

THE KUIPER BELT JOB is a space opera caper novel, a mash-up of Firefly, Leverage, and The Expanse. It’s an ensemble piece with complex character relationships and a twisty, compelling plot, but beneath the entertaining surface it raises deep questions about identity and personhood. In a world where minds can be copied, what does it mean to be “me”?

Oh wait, I left out one important detail… I started work on this book at the beginning of NaNoWriMo in 2017. It actually took three years and one month to get to this point.

Let’s back up a bit. I started writing Arabella of Mars in November 2011. Finished it and submitted it to Tor in October 2013. Got a three-book deal in October 2014. (Yes, it took a full year to get an acceptance. And another six months after that to receive the contract.) Then Kate was diagnosed with brain cancer and had brain surgery in November 2014.

Somehow I managed to revise book 1 by August 2015, and draft book 2 by June 2016, all while caring for Kate. I got my revision letter for book 2 in August 2016. Revised book 2 while Kate was dying, and turned in the final draft in October 2016 — the day after the funeral. I dove right into book 3 (I could have gotten an extension from Tor but needed something to do), submitted a draft in July 2017, and turned in the final draft in October 2017 (pulling two all-nighters to get it done by deadline). And then I stalled.

(Reality check: not only had I just finished a trilogy, and now had to start an entirely new world and characters for the first time in six years, but I had just had to write book 3 in 6 months and heavily revise it in 2 weeks… because my wife died. Not to mention Trump’s election. Of course I was stalled.)

I selected an idea for my next novel from among several candidates in October 2017 and started drafting in November 2017. But I only wrote a few thousand words during NaNoWriMo 2017 and then set the book down — it just wasn’t coming together. I spent most of November-December 2017 on copy edits for Arabella book 3. I wrote a standalone novella January-March 2018, but didn’t submit it anywhere. I’m still not sure if it’s any good at all. April-July 2018 I barely wrote anything at all. August 2018 I tried to resume work on the WIP but didn’t accomplish anything other than “noodling” — brainstorming, research, character sketches, and outlining. So in September 2018 I signed up for a “write a novel in 8 weeks” workshop through Literary Arts (basically a guided half-NaNo with a target of 50k words in 8 weeks). That went really well! I wrote about 20k words… and then I had an intestinal blockage and spent 11 days in the hospital, which knocked me on my ass. I didn’t write another word until January 2019.

In August of this year I started to get my feet under me again, and after a few throat-clearing exercises (what Jay Lake used to call “writing-related program activities”) I returned to the WIP in September. I think I had reached the point in the pandemic where the situation was, if not actually improving, at least not changing as frequently, and so I had energy left for things other than worrying. I wrote pretty steadily in September and finished up a 104k-word draft at the end of that month. I revised it in October and November, including changing some character names and relationships and moving one large section from one PoV to another.

They say no novel is ever finished, only abandoned, and at the end of November I realized I’d reached a point of diminishing returns on revisions, so I decided to send it to my agent for his feedback.

I don’t have a publisher yet. There will likely be another round of revisions before it’s even submitted. It may not sell. But after three years and a month, it’s complete. Yay.

Just got my royalty statement from Tor for the 2nd half of 2019. All told, including all formats of all three Arabella books, I have sold almost 25,000 copies as of the end of 2019.

Hey CoNZealand 2020 members! I’m doing a pre-con online panel on “Wild Cards as Alternate History” with Melinda M. Snodgrass, Max Gladstone, Carrie Vaughn, and Daniel Abraham! It’s at 1pm NZT 7/18, which in the USA is TOMORROW – Friday July 17 – at 6pm PDT or 9pm EDT. Hope to see you there! https://conzealand.nz/programme-events/programme

Oh hey! Tor is making an omnibus ebook of The Adventures of Arabella Ashby (includes Arabella of Mars, Arabella and the Battle Of Venus, and Arabella the Traitor of Mars)! Preorder now and get all three books for just $2.99!

Solving the Zoom “Virtual Background Video Could Not Be Found” error

When you add a still virtual background into Zoom, it copies the image file into a private directory. But when you add a video virtual background, it copies only a still thumbnail into its private directory, along with the video file’s location. If the original video file is deleted (e.g. it’s removed from the downloads directory) you’ll see the “[file].mp4 could not be found” error shown below. If you want to use custom video backgrounds, be sure to put the file in a place where it will stay around before adding it to Zoom. 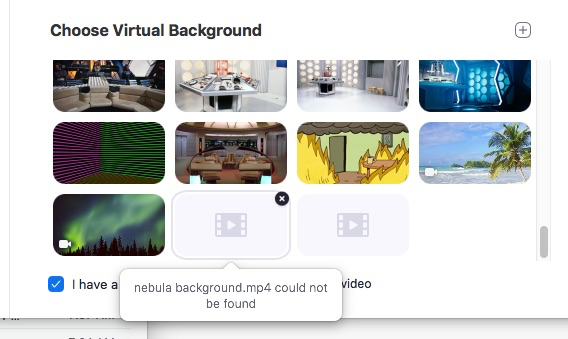 Tune in TONIGHT (May 21) at 7:30 PM Pacific Time to see me guest-host Thursday Night Theatre: Facebook Live! from The Pulp Stage!

To see the show, go to http://www.facebook.com/thepulpstage and click on VIDEOS. You’ll see the “Is Live” video with the red dot starting around 7:25 pm, Pacific. The show runs until 8:00 and will be followed by a 15 minute talk-back with director Matt Haynes.

The theme for this evening is “Pulling the Trigger.” Dare you

See what happens, quite unexpectedly, in an old favorite by Tom Slot plus new works by William Thomas Berk and Thomas Gondolfi (a special theatrical adaptation of his story from the celebrated anthology by Impulsive Walrus Books… go Frog and Esther Jones!)

I’ll be teaching two more online classes for Clarion West later this month! You can sign up now for “Using All the Senses” on Tuesday 5/26, 12-1pm PST and “Using Sets and Props” on Thursday 5/28, 12-1pm PST.

OryCon starts today! Here’s where you can find me: